After studying graphic communication at La Cambre, Charley Case exhibited ‘Man Running’ in 1994, which was his first exhibition. The drawings on display showed a man running breathlessly in some headlong search. Manipulated from childhood, drawing is his favorite technique. Ink drawings, traced with a quill or bamboo. Other techniques were to come later to express the topic even more acutely. Words were already sliding into the image, bringing another dimension, imbued with playfulness and irony. The artist’s preoccupations could also be perceived: love, death, conflict and paradox- ‘The Bibliophile’ was his second exhibition, in 1995. It bore the name of the novella by France Borel that he illustrated. Along with the drawings from this book were the photographs ‘Chinese Shadows on Tibet’ and the ink drawings that would illustrate a book by Arthur Schopenhauer (‘Eristic Dialectics or the Art of Always Being Right’). The photos included a couple of Tibetans holding one another by the shoulders. In a scrubbed, almost monochrome vein, another photo showed a desert that stretches into the infinite. His photographs were already revealing a marked style, a highly personal way of capturing reality. The same was true of his drawings, with their free and assured strokes.

The exhibitions that followed marked a new era in his work: travel. Charley Case finds the inspiration and ideal conditions for working in travel. During odysseys in Europe and abroad (in India, shooting Sangam in 1998, for example, or Cuba in 2000), he drew, painted, took photographs and filmed tirelessly what he saw, felt and experienced. In September 1996, Café Orbital, one of the first Internet cafés, opened its doors in Paris. To mark the occasion, Charley Case silk-screened the internal network of a monumental motherboard on a circular-shaped moulded ceiling, which created the surprising effect of a high-tech starred sky. On the walls, other works displayed his whimsical vision of the internet: maps of imaginary computer networks, orbital cities, motherboard silk-screened on to canvas and a multitude of drawings of the ‘Internet Dictionary’. One of his concerns was to question the current world and display its icons to infinity. The madness of computers, the euphoria of people in front of the tool, the solitude of the technological jungle are expressed through his drawings. At the opening, the effect was all the more magnetic due to the images exhibited on the walls appeared simultaneously on the computer screens, as though they had devoured them to send them traveling on their own networks. The virtual and real bounce off one another in a mutual emulation.

His home base became London in 1996. Between journeys, he invented new forms and new media that he put together himself. Between 1996 and 1997 he discovered the work of Marlene Dumas, as well as Gabriel Orozco, Jean-Michel Basquiat and Anish Kapoor. These are all artists who had a profound effect on him, and who would leave a variety of traces. Displayed in London, his barcodes showed spontaneous graphics akin to pop art. In a different, more serious vein some of his drawings appeared in the newspapers ‘The Guardian’ and ‘Le Soir’. The paradoxical state, the single thought or the omnipotence of the multinationals were all topics that he was asked to illustrate. In London, he continued his research into the heart of topics such as scars and crowds, while roughing out the storyboard for his future film facility that he called ‘Sangam’.

Charley Case’s first work in cinema dates from this time. His first attempt was an interpretation of Saint-Exupéry’s ‘Little Prince’. He transposed the hero into the modern age and renamed the work ‘The Seventh Planet’ (1997). In the short ‘Friday, June 18, 1999, City of London’, he uses a reportage style to look at the electric situations taking place in Ibiza, Berlin, London, Stuttgart, Prague, Brussels, Glastonbury etc. He witnesses the widespread rage against the capitalist system and the emergence of an alternative system out of the system, out of time. For ‘About The Anti-Capitalist Carnival’ (2001), two screens arranged face-to-face showed the same struggle, one clear, and the other in filigree. One on each screen, the rebellion grinds on, whether ferocious or euphoric: the destruction of a McDonald’s, the Notting Hill carnival etc. On the other screen, all appears calm, but with an underlying emotion of pain: with slow, deliberate gestures, a man arranges the headstone for a dead brother. This approach reveals great sensitivity to political and social debate. His works militate for a freedom of expression and total movement.

Since ‘Man Running’, through the surfer prisoner of the internet and the rover of ‘The Seventh Planet’, Charley Case has been obsessed by human beings, in their solitude and their “crowditute”. Both are obsessive in ‘Sangam’ (man walking on the banks of the Ganges), ‘Man going to Sea’, ‘The Anti-Capitalist Carnival’ (man against the elements earth/air/fire/water), the drawing of the man dwarfed at the summit of the volcano crater or the intertwined nudes in ‘Peanuts’ Love’. Man at the beginning of the world, at the beginning of himself.

There was an important encounter with the work of Douglas Gordon in 1997, especially his video installation ‘Between Darkness & Light (after William Blake)’. The huge influence of this work was to be seen during the Scars exhibition (1998, Dorothée De Pauw Gallery). The ‘Scars’ in question are photographs of scars that are almost white. A large ring was suspended in the centre of the room like a mandala. Whenever someone approached, a photographic series of sutured wounds appeared. He also presented immense photos of faces of which the negative had been scratched beforehand with a razor blade. “The person we dream of being, the ideal ‘me’, does not always correspond to the person we are. Man is not a compromise. The scar is the image of an internal tear, the eternal duality between dream and reality.” Using three television screens, he superimposed images: the face of a man dissolves into the face of a woman, then the same face is sometimes that of a man, sometimes a woman, and finally, the image of a mother and her child are superimposed together. Once again the video-maker explores the theme of duality, a theme he explores further in ‘(entre)’ (2001 - 2004), a travel film divided in seven parts in “which each fleeting owner can leave a trace on the sleeve by writing his name”.

The workshop project and video ’Nemawashi Cacahuète’ (2003 - 2004), part of ‘(entre)’, condenses the author’s world in a very pertinent manner. In the incongruous space of an organic capsule – a polyester peanut sliced along its length – little invited bodies wriggle inside the synthetic nut. Like little chromosomes, they scrap and jostle and love and reject one another. The one pushes the other away and then tries to attract him/her back. The theme of duality so dear to Charley Case is revealed. In Japanese the word "Nemawashi" means the art of placing persuasion into a system. Lobbying, they call it today. The insertion of a peanut creates a personal laboratory for studying human relationships. “A dual world can be lived in when it is unified”, he says. Opposites meet, without their identity being affected. The symbol of the egg reiterates the original place, the sacred form. The intimate relationship experienced inside the peanut also tells the story of mankind’s relationship with itself.

In September 2004 Charley Case choose to produce a work in situ in La Verrière Hermès: a tree whose roots and branches extend to 13 meters. The tree and its tentacles are made up of a multitude of little human forms, fluid, almost liquid, produced in monochrome (as shown in the video ‘Caminothérapie’, 2005). “Mankind is like a tree. We are all one in the tree. We are also trees, we have our roots, our seasons. We talk about our trunk, our hair is like creepers, our arms the branches…”. The tree of life wants to reach beyond the walls, as if it feels constrained, despite itself, to go beyond the authorized limits. The small characters make up the trunk and the branches link them, while some stop others from falling or on the contrary, drag them down as they fall. Everything is linked to everything else, consciously or unconsciously. 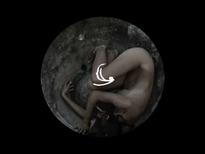