Messieurs Delmotte positions himself somewhere between reality and imagination, between genius and dilettantism. Distinguishing himself through a formal dress code, poker face expression and meticulously combed hair, Delmotte presents himself as a dashing character (a double) that surprises his audience with – unpredictable and absurd – gestural discoveries. And yet such gaiety and nonsensical behavior betray an existential and poetic revolt. Delmotte engages himself in a hilarious and heroic battle dealing with objects, humans or animals alike. In so doing, he undermines ‘the rules of the game’.

Messieurs Delmotte is far from a newcomer to the art world. His video productions, photographs and installations have been shown in solo and group exhibitions throughout the world and of course Belgium, where he is also well known for his mixed media parties. The deadpan, Buster Keaton-like mystery artist poses as a real dandy: he is irresistibly charming and as elusive as ether. His dedication gives way to what he cannot suppress. His actions are so blatantly topical, so banally urgent they can’t be postponed. They have to take place, then and there. He translates his unbridled naughtiness, his love of danger and way of sneering at the institutionalised art world into singular actions that result in a one-part narrative image. Coarse and crude, his videos make a mockery of just about everything. They stand aloof from smooth perfection and are produced with the simplest of audio-visual means and a unity of time, place and action. Mimicking the world of animals and objects, Delmotte is a great pretender whose whimsical feats need no explanation--they’re just absurdly cheerful and dogged. He repeats his actions on several occasions, so that one can see slight variations of him walking in fountains, putting buckets of water on his head or chasing cows. He’s at his best when interacting with trees, butting heads with them or climbing a stepladder and leaping into them. The results are straightforward and rude but also pure and even poetic; Messieurs Delmotte’s videos are absurd one-acters.

In 1998 he gave a video-sequence the generic title of Flying Chickens. This title was then reused for a video-installation at Argos (“Rather a pretext for contextualizing than for conceptualising the work into the framework of an exhibition”, according to Messieurs Delmotte). At Argos, Flying Chickens consisted of 15 monitors but it could just as well have been made up of 152: the screens were just a set-up for showing a certain obsession – or rather, a ceaseless fixation. Many artists have been inspired by the air, the fall or the jump in the creation of their individual myth. Monsieur Delmotte falls too – falling into a pond after setting his backside on fire or falling as a result of having sawn off the legs of a chair on which he was sitting, and the list continues, for he falls more than his fair share, falling in pirouettes, falling stupidly, falling philosophically above all, tumbling, sliding, tripping, somersaulting and jumping into the void. “Where the fall”, Jean-Yves Jouannais wrote about Delmotte, “cannot be given its abstract meaning of disgrace (in politics) or devaluation (in economics), but essentially must be seen as an epic capitulation beyond the united resistance of the will”, the idiotic fall is orchestrated to have the body lie down on the road, and remain lying down while projectiles whistle overhead, and jumping to the side enables one to continue fighting the fear of saying “no”.

Delmotte devotes himself to substitution ‘re-creation’, as with the numerous prosaic images which he has already transfigured. His works are not self-portraits and even less so transpositions of the designer in one or several fictitious character(s). They can merely be described as dissolved identities of an artist, as sort of rejections or absences of subject. Home made movies like the compilation Ce qui est Fait le Mal est Fait (‘What’s Done Evil’s Done’) present an aesthetic with no object, considering the work of art simply as a passage, a transitory form transporting our way of looking at behaviour, ways of production, and relationship to the world. The spirit goes ahead of the body, establishing connections, picking up clues even before we have a chance to examine the exhibit close-up. Between reality and fiction, the one is possibly within the other; perhaps it is one and the same thing that is exploding into a multitude of fragments, dispersing until they disappear. There is an extremely fine line between the prompted scenario and the real sequence of an act. What would happen if you were to go into your neighbours’ house without their permission, in order to kiss them on the mouth, and ended up really doing it? As Monsieur Delmotte states: “I do it, I do not know why, but I do it !” 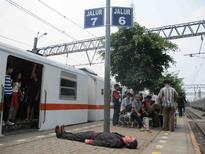