As part of transfer_3 - festival of Dutch, Flemish and Georgian culture, which aims at building a bridge between culture in Georgia and the Low Countries, argos was invited to put together an exhibition on recent and leading video art in Belgium: out of balance. argos opted for a thematic selection, that will be set up in the central exhibition hall of the Karvasla, a 19th-century caravanserai, now acting as a museum.
Out of Balance is a video installation project bringing together work by nine Belgian artists. A situation is called instable when it is no longer able to maintain itself. In the exhibition literal as well as metaphorical types of instability are shown, stretching from corporeal, physical (Catrysse, Delmotte, Van den Broeck) to more psychological types of instability (Crabeels, Theys). Each of the installations centres on the body of a performer, often the artist’s own, like in the works of Delmotte, Theys or Cattelain. Sometimes there are even two bodies involved (Meyer & Schaerf, Catrysse) or a group of people (Van den Broeck). By accentuating their physical and performing nature a lot of the video installations in the exhibition toy around with the idiom of the pioneer era of video art in the 70s, when visual artists and choreographers explored the new medium to push back the borders of their artistic practice. 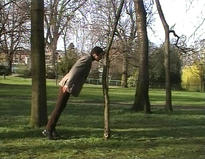