These three films were made by Belgian artists during their journeys to faraway countries. They are the result of the confrontation between the own and the foreign culture; they propose three ways to deal with the questions of the ‘other’, the ‘stranger’, to investigate the tension between the familiar and the unknown, to make the ‘exotic’ more understandable. The three works also form examples of alternative audiovisual travel journals.

Both Els Opsomer and Laurent Van Lancker use stills to create a string of personal impressions on Palestine, slaloming through a broad range of feelings and emotions. Anger, nostalgia, melancholia, desperation and compassion constantly shift and argue to be dominant in the works. Messieurs Delmotte’s strategy is somewhat different. In Tourist renouncement he filmed right on the spot, in Togo, East Africa. He is interpreting clichés and misunderstandings that exist for ages in between the two continents and cultures. Delmotte’s travel journal is at the same time harsh and cynical but also touching and witty.

Els Opsomer made this video with the amateur software iLife. It is a video letter to her friends, an introspective account of a short visit to the Palestine. Pictures which were taken there are widely and deeply explored and edited, with the content of the letter as subtitles. Musing she asks herself questions about the preservation of human integrity in an area where violence is experienced in daily doses, where human dignity is being affected day in, day out on different levels and throughout different generations. “Brutal MEMORY erasing sweetness – Only fragmented thoughts submerge day and night”, she finds, in an attempt to grasp personal integrity and sensibility in the complex rag of reality. The atmosphere of melancholy is drawn out further by the accompanying, minimalist soundtrack of Stefaan Quix.

Els Opsomer (1968) lives and works in Brussels. She is a visual artist and a graphic designer and for a couple of years she was an artist-in-residence with the Rijksacademie in Amsterdam. In collaboration with people like Johan Grimonprez, Herman Asselberghs and Ronny Vissers she realized a couple of multimedia installations. She draws from her constantly growing archive of urban images, puts together a commentary on and reinterpretations of global reality and at the same time she questions the contrast with the safekeeping of personal integrity in this reality. Her installations, photos and videos have been on show, among other places, at the Werkleitz Biënnale, the Centro Galego de Arte Contemporánea (Santiago de Compostela) and the Biennial on Media and Architecture (Graz).

“I had not anticipated this movie”. Laurent Van Lancker went to Palestine and for 31 evenings he recorded his artistic and emotional encounters on video. The 31 impulsive snapshots constitute an impressionist mosaic of human stories full of great dreams and small drama. The director gives his own intimate, personal meaning to that one, almost intangible word... Palestine.

Laurent Van Lancker (1969) studied art direction at the Institut des arts de diffusion (IAD) in Brussels and Oriental and African studies at London University. His body of work mostly contains impressionist documentaries on identity and ethnicity. His films have been shown on many different international festivals and they have been awarded with, among others, the Basil Wright Film Prize of the RAI International Festival of Ethnographic Film and the Youth Award of the Cinéma d’Asie Festival in Vesoul.

The video Tourist renouncement was originally recorded in 1995 in Togo, as part of the project Afrikanisch-Europäische Inspiration, set up by Togolese artist El Loko who was living in Germany. For two months eight artists from various countries in Europe and Africa worked on this cultural exchange. Delmotte filmed his actions, seeming like a grotesque interpretation of the historical relationships between the two continents. In his performances he plays the white man among other things, randily riding up a tree, later sawing down another with a theatrical gesture, then triumphantly shoving his pale behind in a mosquitoes’ nest. Tourist renouncement charicatures hypocritical European tourism, promising a paradise in Africa, whereas a large number of Africans, basing themselves on the same.

In the eye of the spectator the work of Messieurs Delmotte (1967, formerly Monsieur Delmotte) often seems bizarre, absurd or trivial, but to Delmotte his surrealist videos and installations of and with trivial actions are an absolute necessity. His shorts, focussing on obsessive behaviour and compulsive initiatives, make out a long series of attempts to pass beyond the limitations of reality, often with a cartoon-like outcome. Delmotte’s work has been shown, among others, at the Espace Volga (Paris), The Function Room (London) and the Kunsthalle in Wuppertal. Hij lives and works in Liège. 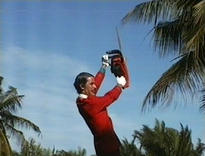 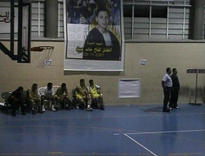 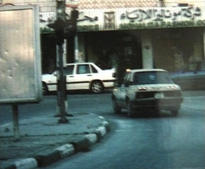