The video ’Tourist renouncement’ was originally recorded in 1995 in Togo, as part of the project ‘Afrikanisch-Europäische Inspiration’, set up by Togolese artist El Loko who was living in Germany. For two months eight artists from various countries in Europe and Africa worked on this cultural exchange. Delmotte filmed his actions, seeming like a grotesque interpretation of the historical relationships between the two continents. In his performances he plays the white man among other things, randily riding up a tree, later sawing down another with a theatrical gesture, then triumphantly shoving his pale behind in a mosquitoes’ nest. Tourist renouncement charicatures hypocritical European tourism, promising a paradise in Africa, whereas a large number of Africans, basing themselves on the same false delusions, chase after an ‘European dream’. The film has been re-edited, almost ten years after the material was filmed and it is situated between a documentary, a fictitious account and video art. 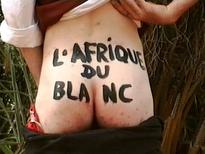 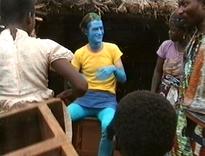 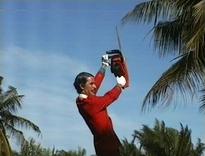