In the frame of the arts festival ‘Wunderground’ Argos Centre for Art and Media presents a program of short animated films that might feel quizzical at first, but often have a melancholy undertone.

In the animated video ‘Everybody’ (2009, 4'5"), Steve Reinke confronts the viewer with a serie of coarsely sketched animals and imaginary creatures. Dancing, laughing and joking they talk about shame, disgust and uncomfortable situations.

For ‘Das Modell’ (2006, 6:15"), Florian Gwinner designed a scale model world where a camera slowly pulls back through delivering a conjuring result.

Messieurs Delmotte is present with two works. In ‘Bike’ (2000, 1'30 ") we see him jump unexpectedly from his bicycle. For ‘Neither “IN” Neither “OFF” (In Between Venice and Biennale’ (2013, 25’55”) the dandy poseur moved to Venice where he performs a series of pranks at floating speed.

Ria Pacquée closes the list with ‘Running around’ (2015, 11'59 "), an absurdist interpretation of an urban trail. We see the artist running around objects and structures that she encounters in the city of Antwerp. Her seemingly banal actions turn sometimes into pure magical moments. 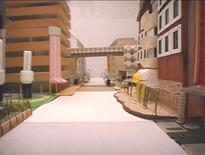 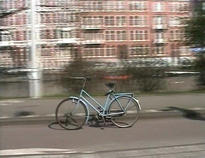