As a prelude to the Festival van de Verwarring (Festival of Confusion) 2012 / Sapere Aude in the Beursschouwburg, Argos presents the Black Box programme Sweet Protestations. Five short to medium-long video documents examine and illustrate the role of the artist who enters the public domain in order to question the surrounding ’reality’. In the works the maker becomes personally transformed into a ‘sweet’ intruder, into an object that encroaches upon the surroundings without concomitantly changing to direct confrontation: interactions which raise a field of tension between the onlookers and the singular actions of the artists. In these ‘documents bruts’, which engender credence, ridicule and even real civil protest, the artists employs an idiosyncratic jargon which often borders on ritual. In The Intruder Vincent Meessen moves silently through the busy shopping streets and market squares of Ouagadougou, cocooned in a suit of cotton blossoms: Burkina Faso’s ‘white gold’. The white figure expresses the object of attraction and surprise or of aggression and ridicule: for the passers-by he is an image susceptible to appropriation, a symbolic mirror bulging with implicit political, social and economic significance. A 1995 cultural exchange project between Europe and Africa forms the introduction and gives rise to Messieurs Delmotte’s Tourist Renouncement, an artist whose filmed mini-performances attempt to transcend reality and its limitations. This early work strings together critical actions, steeped in bitter-sweet humour in which he theatrically interprets the historical relationships and clichés between the two continents. Less direct in nature is Straatman Lottery in which Angel Vergara Santiago chops up recordings of performances in Birmingham under his alter ego, Straatman, with images of the city’s population, an entirety interspersed with sketches and textual comments. Although the title refers to an imaginary lottery which he organized there, Léo Ferré sings/muses on L’impossible to a text by Arthur Rimbaud. Although Zwei Betoncadillacs in Form der Nackten Maja on close inspection forms a documentation of the realization of the sculpture of the same name by Wolf Vostell in the West Berlin of 1987, this period piece – at the time the work was inaugurated to celebrate the 750th anniversary of Berlin; in 2006 it was restored to its original form – can also be read as a recorded performance. The debit for that is the role of the onlookers who protest against the work (“Wasting tax money is no art”, “That kind of art here? No thank you”) but also the position of Vostell himself who as a real maestro directs his team and the works. In addition, the historical Inktpot (Ink-well) by Luc Deleu, Filip Francis & De Nieuwe Coloristen (The New Colourists), in which the artists transform an abandoned Second World War bunker in the Koksijde dunes into an ink-well, the register of recording rises as a result of inserting items including animation and images of a snow-covered Brussels during the editing. 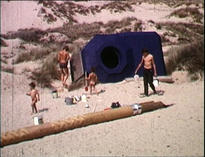 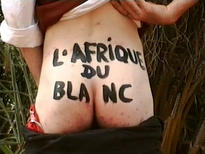 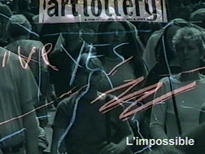 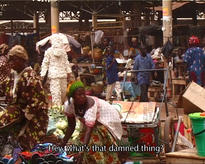 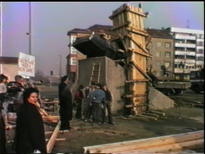