Jacques Louis Nyst, who was a painter, multimedia artist, publicist and also pioneer of Belgian video art, produced a very consistent body of video work. Together with his wife, Danièle Nyst, he made reflective, capricious, fantastic, poetic or purely theoretical videos. The concern of how art ‘functions’ is always central and Nyst referred to his work as ’rational art’: a confrontation between objects and their representations. In an early phase, he tested his own ideas about semantics in a relatively strict way, formally. For the viewer, however, Nyst had already paved the way for countless interpretations.

Spanning a period of over thirty years, Jacques Louis Nyst produced a very consistent video oeuvre. Together with his wife, Danièle Nyst, he made video works whose approach varied from reflective, capricious, fantastic, poetic or theoretical, presenting semiotic studies into language or the representation of mental codes, symbols, characters and objects. Jacques Louis Nyst studied at the Academies for the Fine Arts in Liège and Madrid, and began painting, writing and producing video works. He would later return to the Liège academy to teach drawing and video.
An emotional and/or intellectual contemplation on how art 'functions' is central to his work. Nyst investigated how semiotics in and around the visual arts are generated through the aid of image, sound and language. He referred to his work as 'rational art', indicating that it had everything to do with structure, in the literal sense of the word: a confrontation between objects and their representations. In his paintings and drawings, for example, Nyst juxtaposed 'image identity' with abstract meaning, with the intention of creating altogether new readings. Nyst extended this technique to his personal investigations. He viewed a simple installation, such as one of his paintings hung alongside a monitor showing a video work - also his - as a valuable eye-opener, a key that had to form a mental starting block towards an entirely new universe of meanings and interpretations.

With his extensive body of video work, Nyst related to Belgian surrealist tradition. In an early phase, he investigated his own ideas about semantics in a still relatively strict form. For the viewer, however, he had already opened the door to countless meanings and interpretations. His 1975 video, La farde aux canards, combines ducks with an array of functional objects (a foot bath, electrical cables, and so on), entities whose literal meanings have nothing whatsoever to do with one another, and which in that sense, also remain ’constant’ in substance. Nyst’s combinations, however, generate new and different meanings, such as aggression, and in this case, the viewer’s hilarity. In a second stage, Nyst focussed more sharply on language, now in its most basic form: as a mechanism meant to generate the actual interpretation process. For films such as The Clown and the Hole (1981), apart from the visual subjects he presents (here a clown, learning to play a small trumpet around a small opening), Nyst follows a pattern in order to form an image: of contact with material or matter, of the suggestion it makes, of its contemplation and the sense of it. From there, his videos alternately touch on non-fiction, the imaginary, humour or a story. 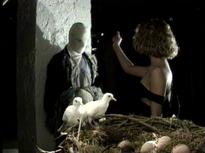 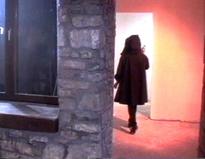 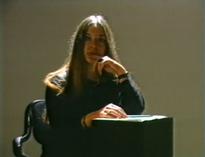 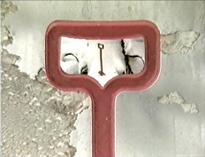 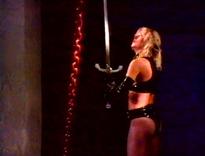 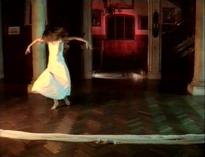