In 'L’ombrelle descendant un escabeau’ (a title directly quoting Marcel Duchamp’s 'Nu descendant un escalier’) Jacques Louis Nyst appears once more as the explorer who discovers for the first time a common and well-known object, the paper parasol this time. He tries to explain its origins, way of life, and even reproductive techniques. Reality, even when it takes the likes of something as absurd and laughable as a paper parasol, opens up new horizons, attaining unusual points of view. Just as René Magritte would fill the object with new meanings by changing its context, Nyst displaces the object through the image and within it. This small displacement is the cause for the metamorphosis that takes place and we’re left at the boundary of a legend which is neither real nor fictional. 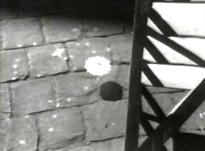 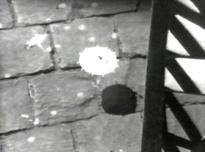