'Thérésa Plane’ is an itinerary in the form of an infinity symbol shaped loop. At its point of intersection a frog who thinks that everything is pretty and Thérésa whose principle activity is to glide, meet. A love story between the frog and Thérésa ensues. All would have gone quite well, were it not for the intervention of destiny. The frog and Thérésa will be witnesses to a nightmare, at the end of which they will have lost their sense of direction. Thérésa and the frog can’t find each other anymore. Separately they pursue a route that leads to the same nightmare that leads the viewer to believe they will meet once more on the same point on the infinity loop. In this work, Nyst uses early computer techniques to create illusions of images in the image. The setting is a simple pilar where all of the action is happening, on and around. A groundbreaking Belgian video piece in between absurd theatre, fairytale storytelling and conceptual art. 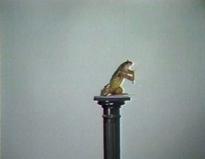 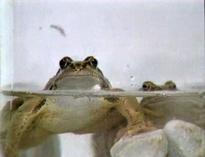