Theresa and Codca question themselves, faced with a televised image of a film from the Fifties. The image has this strange power to provoke associations that escape their reason. It plunges them into a period from their childhood where a little pink spade and a nursery rhyme/tale seem closely associated to this extract of the film that makes them dream. Both the image and the story/history are prisoners to this manner of writing or describing, which have a determining influence on our reasoning. So let’s imagine that we can pass underneath the narrative, to wriggle through the signs, as when we were little, to find ourselves at that point where we can once more see as if it were for the first time; this point where the opaque screen of the image becomes transparent, translucent, hyaloid; and allows the light from a legendary universe to filter through; a universe where images scintillate and multiply, without rhyme or reason. Often it is this disorder which is so beautiful. At the basis of this disorder there is an energy which keeps me alive. Once upon a time… On which side of the screen would we be? 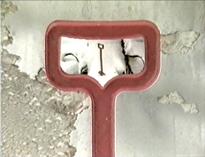