This short video is one of Jacques-Louis Nyst’s earlier experiences with the medium. If we distinguish two periods in the Nysts’ video work (each corresponding to a different generation, that of the plasticist videomakers of the 1970’s and that of the video storytellers of the 1980’s), 'Le voyage de Christophe Colomb’ is clearly characteristic of the first, a time when plastic artists had only recently discovered video and used it still as a mere extension of their work, often resulting in somewhat conceptual and minimalist (yet ironical) pieces. In Nyst’s case, as his plastic work of the time was concerned with the poetical reading of everyday objects, his first videos will follow the very same path. It is almost as if he used the screen as a canvas where all sorts of objects can be placed and played with: from coffee pots and eggs to dolls and plastic bags. Nyst confronts these objects with the ways in which we represent them. The common and the banal are transformed into pure poetry. Nyst’s fake innocence, poetical humour and logical delirium are the result of associations, metaphors, displacements, connections, gaps and puns. In ’Le voyage de Christophe Colomb’ an egg reveals itself slowly, just as the land does when approached by sailing ship. This egg which suggests another famous egg, Colombus’s (a story generally used to illustrate the skills of practical judgement and evaluation), bears an inscription: “TERRE” (both Earth and land in French). The TV snow suggests the sea, and the sound of submarine radars and astronaut speeches recalls that of the sailors. A new world has been discovered, a journey achieved, and all of that without ever leaving the Nyst living-room space and objects. Nyst’s work appears as an affirmation of the universe contained in everyone’s home. For the Nysts, their Presseux-Village, where all their videos would be shot, is not only the centre of their world, but also that of the universe. 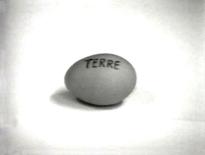 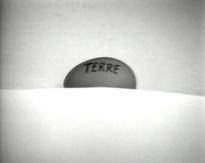