A pioneer when it comes to working with video in Belgium, Jacques-Louis Nyst (1942-1996) produced a considerable body of work in this domain, covering a period of over thirty years. His first works were realized as part of the group CAP (Cercle d’Art Prospectif), with Jacques Lennep and Jacques Lizène, amongst others. Influenced by the Belgian surrealist tradition, Nyst based his work on a semiotic study of language and the representation of mental codes, symbols, characters and objects. He tries to understand how art works through contemplation, both emotional and intellectual, combining the perspective of a child with that of a researcher. During the 1970’s he developed an archeology of everyday life, and behind its seeming simplicity a criticism of modernity lies hidden. In L’objet the narrator, who finds himself in the future, discovers an unknown object (in fact a small tea pot). The analysis he makes of it is rigorous, yet completely mistaken. This questions our interpretations of ancient civilizations, but most of all the way science is put forward as absolute knowledge. 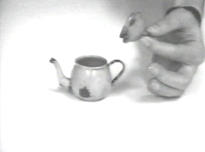 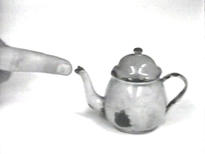