In his work Roy Villevoye explores issues around anthropological representation, the conventions of documentary filmmaking and the legacy of colonialism. Even though his videos, often realized in collaboration with Jan Dietvorst, are frequently considered documentaries, he distances himself explicitly from the genre, by freeing himself from a number of conventions that characterise the documentary: the use of voice-over and lineair narrative structures editing as way to condensing time... Since the early 1990’s Villeroye’s work has focused on the Asmat region of the Indonesian part of New Guinea. The film Propeller (2004), for example is a kind of detective story about the origins of an aircraft propeller lying in the jungle, in which highly distinct accounts and narrative styles are juxtaposed. While Propeller contrasts mythic storytelling with a scientific search for historical truth, The New Forest (2004), made with Dietvorst, has a very different structure. Stories are also recounted, but this time without any clear progression or goal, except perhaps to destroy the illusion of New Guinea as an untouched, insulated world unto itself. This results in a pragmatism that is perhaps puzzling, but which does not need to be concealed. After all, this is all about real people, not artistic or ideological constructs.

"In a way, the camera image is the equivalent of looking. It’s also an attractive medium because documentary material is easily accessible for everyone; you don’t have to, as it were, teach the viewer how to look at it. Looking at paintings and installations is, of course, a different story. Our films were made amongst the Asmat in Papua (formerly Netherlands New Guinea), now part of the Republic of Indonesia. It is one of the most remote areas of the world and the harsh conditions that hold sway are clearly visible in the way of life and the world view of the people who live there. Violence and the control of violence play an important role in their culture. Going there means coming face to face with the essential questions of your own existence. So, for an artist, it’s like starting from square one all over again. It’s taking a risk. And in spite of the distance it’s still possible to gain access. The nature of our material means that we are almost automatically classified as part of the documentary genre. However, by no means do we wish to identify ourselves with that genre. The point is precisely to free ourselves from a number of conventions that characterise the documentary. The voice-over, for example, in which an omniscient narrator explains and provides insight into the situations. Documentaries often move at high speed towards a goal, usually some kind of conclusion or a climax. For us, this is false; we believe that it doesn’t do justice to the subject. In the first instance, we don’t want to answer questions, we want to raise them.Documentaries in areas like the Asmat territory are not infrequently filmed in just one week. This can only happen when there’s a preconceived plan; filmmakers then go in search of the truth that they themselves have, as it were, hidden. These are films in which the people and the situation are no more than walk-on parts on a set. The conclusions are fixed; these are stories that stem from an established view of the world. Another characteristic of the documentary is the fact that the genre as a form of journalism appears to deal exclusively with problems and negative scenarios. In many documentaries there’s an artificial and unjust suggestion that the situation is straightforward and that problems can be solved. These are reports that imply social engagement. We, on the other hand, wonder what else there is to be seen, other than the problems that have already been indicated. Our films don’t tell neatly rounded-off stories that unwind at a rapid tempo. We specifically aim to keep the speed down. Our film images and sequences are slow, drawn-out and vague. The editing is solid; the sequence of images is not necessarily logical or meaningful in a comparable sense. The editing is not used to condense the time. We have noticed that the idea of presence is reinforced by the sensation of real time. As a viewer, just like the filmmakers, you have questions that remain, but you really have experienced something when the film comes to an end. We visited the Asmat regularly; our connection with them still feels like a connection with family members. However, we don’t have any illusions as far as this is concerned – when we’re not there, they certainly don’t think about us all that much. They live from day to day in conditions that in many respects are ruthless. This results in a pragmatism that is perhaps puzzling, but which, as far as we are concerned, does not need to be concealed. After all, this is all about real people, not artistic or ideological constructs.The inequality, though, is something that you can’t miss. We can go to them; they can’t come to us. There is a great difference in levels of affluence, that’s a fact. But we don’t try to make this into an issue. The important thing is to find a way of getting on in spite of it. In our film The New Forest a half-naked Papua comes out of the jungle in something that only barely resembles a pair of trousers. When he gets closer, you can see that he’s wearing yellow clogs. Shortly afterwards, he explains to us what clogs are and for what purpose the Dutch, mainly in the past, used them. He says that he bought them himself in the Netherlands and that clogs are ideal in rainy weather. That’s what you call breaking conventions. Stubborn expectations about primitive savages in their exotic surroundings are completely overturned. And by someone we thought we already knew everything about. That’s the way the world is: confusing, complex, hilarious and inimitable. And that’s what we want to show in our films." 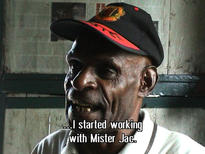 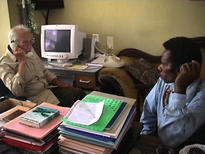 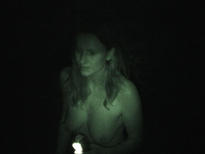 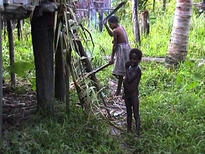