In his work Roy Villevoye (1960) explores issues around anthropological representation, the conventions of documentary filmmaking and the heritage of colonialism. Even though his videos, often realized in collaboration with Jan Dietvorst, are frequently considered documentaries, he distances himself explicitly from the genre. No use of voice-overs, no condensing of time through specific editing, no singular narrative structure – in fact Beginnings is void of any documentary regularities, and yet we, as spectators, feel as if we understand immediately what we see. We recognize and identify a naked black male and female, steadily making their way between trees and plants. A while later another naked female reads out a biblical story about the creation of Man and Woman in her own language. In a similar setting a white male and female are presented. A re-enactment of a possible ‘Eden’ or an image of a bunch of naturists? Villevoye confronts us with the Western longing for a myth of origin and its projection onto the ‘Other’. 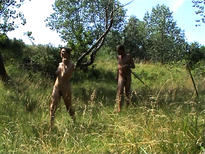