The term volte face, from the Italian ‘voltefaccia’, is comprised of ‘volta’ (turn) and ‘faccia’ (face). It expresses a turnaround, a complete change of stance. Often used to portray a sudden switch of opinion, the term can also be applied to moving camp, in a military sense. Volte face refers to a selection of works from the Argos archive, in which radical changes of perspective and assorted distortions define the structure. Here, the expression is used to designate a selection of works from the Argos collection where radical changes of perspective and sudden distortions define the structure. Such transformations have to do with the viewer’s perception, with changes in genre, or even with the object itself. In Edith Dekyndt’s video, the swirling play of colour precariously spanning the void within a cupped pair of hands turns out to be a soap bubble. Cel Crabeels presents a scene in which a man struggles to take his waistcoat off whilst keeping his suit jacket on. Eddo Stern’s computer game is infused with utopian Zionistic pop songs that, together with a mix of computer game imagery, reveal the violent present-day and thus the flipside of the pioneering ethos. Florian Gwinner presents a true-to-life model of a city that gradually morphs into an assemblage of everyday objects and finally ends-up underneath a chair. And is Michel François’ virtuoso performer really a street bum, or rather a hunger artist? With Bernard Gigounon, the night sky unfolds into daylight, as the sunrays pierce through a forest of dense foliage. Finally, Roy Villevoye entices a playful reflection on the term ‘ethnographic documentary’, with the viewer continuously finding himself on the wrong track. 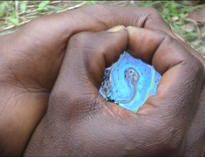 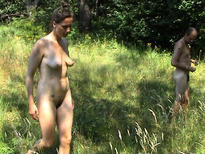 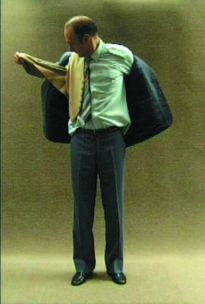