During his studies in philosophy Frank Theys wrote a dissertation on the German 19th century composer Richard Wagner. After his studies, he and his brother Koen checked the intrigues with the scenarios of the epic cycle Ring des Nibelungen and the opera Parsifal, both by Wagner, resulting in the epoch making two volume video Lied van mijn Land (Song of my Soil, 1982 - 1988). They’ve treated these operas with an immoral curiosity and have enriched it with personal and contemporary themes. Combining Wagner’s Leitmotiv technique with the vast possibilities of video techniques, they have developed a video language which consists in adding emotional, intuitive or intellectual connotations to elementary images, which are continuously combined in different ways, so that the narrative structure arises. The apparent megalomania is compensated by the ironical tone, but the exuberant parade of electronic settings, inflatable females, sham rustic, scale models, aestheticizes images into an abyssal game with perspective and space. Frank Theys is fascinated by the psychology needed to preserve the own subjectivity in a postmodern world that is levelled out by money and mass media. He confronts this investigation with many personal reflections: about the relationship between art and technology, about television in which all cultural diversity is ignored, about the degeneration of man and nature and the possible technological solutions and alternatives. His findings result in installations and as of 1992 in the writing and directing of plays, as director in residence for the Victoria Theatre (Ghent). In order to shape these visions Frank Theys creates separate psychological worlds (spaces) inhibited by figures who are carrying a number of connotations that refer to the various psychological characters and situations. He does so by electronic media, animated objects and characters who are communicating with each other in technical jargon. According to Theys television functions as a person who has lost its I. It keeps repeating everything and is nothing itself. In modern society the danger of finding itself in such a situation is very real as the omission of the set values (the centre) is continually urging the individual to give meaning to life itself. Since a few years Frank Theys’ interest lies explicitly in the relationships between man and new technologies. Like in the video-installation De Kus (’The Kiss’, 1997), which shows a couple in intimate embrace, realised with an MR-scan. Theys puts forward that the advanced technology of this post-modern society visualises anything that is muffled away beneath skin or hair, and nature as well as romantic feelings are desecrated and perverted. Furthermore, he foresees that in the third milenium the position of art and its author will be questioned again. Maybe even in so far that the receiver will give a devestating reply to the image that is spread via Internet by completely overwriting it with another action. 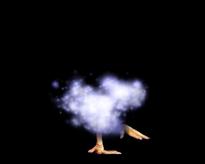 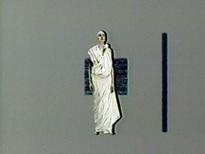