This is the first part of the diptych Lied van mijn Land (’Song of my Soil’), based on Richard Wagner’s operas ’Der Ring der Nibelungen’ and ’Parcifal’. In ’Der Ring der Nibelungen’, an interpretation of a germanic mythological epic, the composer associates power with the possession of gold. In Koen and Frank Theys’ scenario the dwarf Alberich (in ’the Ring’ the conquerer of the Rhinegold) is constantly expanding his power by having his workers (the Nibelungen) work harder in order to raise the production of images in his imagery factory. The workers who do not decide the nature of the imagery production are being bombarded with images in their leisure time. The parallel with the anonymous yet professionally expert producers who work for powerful media rulers such as Forbes, Turner or Berlusconi who are endlessly sending uncritical entertainment programs into the homes of the consumer masses. The Rhinemaidens (elusive, pink, sometimes blending electronic forms) tell the Nibelung Alberich (a naked dwarf) about the Rhinegold. Whoever would be able to forge a ring out of this gold (to make television, i.e.), would gain exceptional power, but in doing this, however, he would have to forsake love. Alberich forsakes love and steals the gold. The supreme god, Wotan (a bald, somewhat foolish looking man who never makes a move without a white pedestal behind which to hide when he feels in danger), has changed his mind and no longer intends to give Freia to the giants Fasolt and Fafner, to reward them for having build Valhalla. When the giants (who have long, blond hair and wear very modern, cream-coloured pantaloons) come to claim Freia, the god Loge (a slightly frivolous god who is very fond of his stole) appears. He evokes the charms and virtues of the god and the giants become interested. They declare themselves willing to accept the gold in exchange for Freia, whom they abduct anyway. Wotan and Loge leave for Nibelheim. Alberich (who, now, tries to dress up in a grubby, little blanket) is inspecting the Nibelungen, who work for him, when he suddenly discovers Wotan and Loge on a monitor. Thanks to the Tarn-helmet, Alberich is able to assume any possible shape. Persuaded by the sly Loge to demonstrate his ability, he changes into a gigantic serpent. When Loge asks him whether he can change himself into something small as well, he adopts the shape of a toad (a video cassette), so that Wotan and Loge can catch him. In order to be set free, Alberich has to give the gold to the gods. He calls down a curse upon the gold. The first victims of this curse are Fasolt and Fafner. In a fight over the gold, Fasolt gets killed by his brother. The gods retire to Valhalla and Wotan sets out to create a race of demigods. The Rhinemaidens ask for the gold to be restored to them, but their request is scornfully denied. 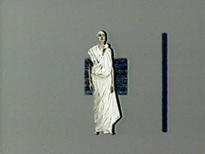 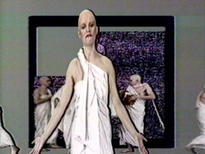 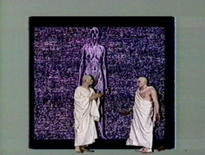