Emily Vey Duke currently lives in LaFayette (USA). She got her BFA from the Nova Scotia College of Art and Design and her Masters degree in Fine Arts at the University of Illinois in Chicago.

Since 1994 she has collaborated as artists and curators with Cooper Battersby, producing works on paper, installations and sound pieces. Under the influence of Steve Reinke, with whom they studied at the University of Western Ontario, they began working mostly with video in 1997-’98.

Central to the autobiographical video work of Duke and Battersby is the focus on the self-image, a handling of simplicity and an attempt at interacting with the viewer. Their shared videos read as a diary that shows events that the artists experience for the first time.

The pair’s actions are searching in nature and relate to the performance and the monologue. At times raw, sometimes amusing, but always introspective and radical, reduction and identification form the key techniques in their shared work. Duke and Battersby search for a very simple visual language that zooms in on the essential. That visual language is seductive to the viewer and has an analytical strength. Rather than choosing ambiguity the artists convey their naked message clearly. Precisely because the pair tries to erase complexity from their videowork, a complicated knot of emotions is laid bare. Besides this there is room for identification on the part of the viewer; in Duke and Battersby’s videos there resides a great potential for ’passive interaction’. Their actions, anecdotes or malaises gain several layers of meaning if the viewer looks at them through the spectacles of personal experience. In this manner Duke and Battersby comment on human relationships, existential problems, boredom or the fear of losing the other, with humour and lucidity. Sometimes structured as brief episodes - as is the case in videos Rapt and Happy (1999) and Being Fucked Up (2001) - and at other times as an associative stream of consciousness (Bad Ideas for Paradise, 2002) the pair invariably interrupts its video footage with minimalist, lo-fi animation that represent human yet absurdist situations with self-concocted a cappella songs. Finally these craftily produced, highly personal works have a voyeuristic edge: they present themselves to the viewer as diaries left lying about, that hungrily await their sneaky discoverers. The work of Emily Vey Duke and Cooper Battersby has been exhibited in galleries and at festivals in North and South America and throughout Europe. 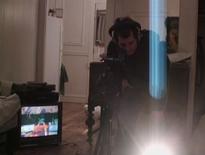