The group exhibition Attack [retreat], curated by Canadian artist Steve Reinke, brought together the work of five young Canadian and American artists. The four video installations by these artists were selected on the base of their common goal: to launch an attack against our longing for nostalgia. According to Reinke nostalgia is one of the most effective means mass media has of manipulating our feelings and interpolating us into our social fabric as consumers. "Our only possible means of escape from these insidious forces, is to temper the nostalgia. But with what? Nostalgia can withstand all forces, break through all other tropes to exert its little tug at our heart strings and remind us that even such a place as ’home’ does not exist. Where no attack is possible, one may always retreat."

For her installation Sighting Elvis Carry Kim hired three Elvis impersonators. They spend some time in a little room with a couch, a table and a karaoke machine. "Every Elvis is Elvis and everyone can be Elvis". Kims installation was the perfect evocation of limbo. In Operation Jubal Brown cuts little wounds in his side, tweezes out bits of fat and flesh, smears it on a stick, and burns it over a candle. Brown positioned the performance and its consequent video as an act of nostalgia, as a restaging or homage to various body art performances of (especially) the seventies. In Sheik Attack multiple computer/video games are played and sampled by Eddo Stern, sound from these games is mixed with Israeli pop songs from the late sixties. Sheik Attack opens with a happy, folksy Israeli song that talks innocently about cooperatively labouring to build houses, cities, a nation. Innocent, that is, until the final verse in which it is declared that if anyone should enter uninvited they will "drop a beam upon their head". The video began then, as an examination of nostalgia, an apparent loss of innocence, which never actually existed. Moderately-Paced Video by Emily Vey Duke and Cooper Battersby is a two-channel video installation. On one monitor is a series of animated characters; animals with the faces of humans moving their mouths as if speaking. On the other monitor is a series of texts, the kind of thing overheard in social situations, where people are straining themselves to articulate a certain version of themselves. The installation is subtitled "Made with the intention of promoting free conversation among viewers, and not to be watched straight through".

Taking the directive rather literally, the installation was placed across from Jubal Brown’s Operation which one imagines is impossible to watch straight through (and yet impossible to turn completely away). In this way the two intimate monitor-based works formed a little hub, a hearth at the centre of the exhibition space. Reinke’s intention was to make one feel like one had a little home within the show, a little home with simple Canadian works. 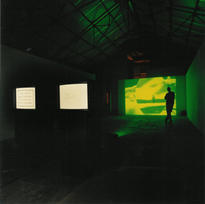 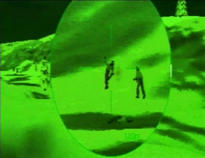 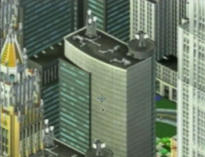