Johan Grimonprez is fascinated by the obscurity of divisions between representation and reality, fiction and documentary, private and public, etc. He makes use of the aesthetic strategies of contemporary mass media to explore phenomena such as identification, voyeurism and fatalism. Media transgressions are the perpetual intruders of our relationship with reality; images replace reality and rewrite history. As a result, we live in a culture of imitation, a ‘Photoshop reality’, where the look-alike rules. Grimonprez suggests that an alternative could consist of the creation of a critical, self-reflective distance through art.

The media-watching experience is largely determined by a friction between distance and closeness. Despite the physical gap looming between us and the screen, we repeatedly want to immerse ourselves in the magical inundation of images. These images no longer just live outside us, but also in us. Much of the relationship between the individual, the image and history in recent decades has been decided by the permanent presence, in constantly changing forms, of images, mostly television – the accelerating rythm in the editing, the change from film to video, the aesthetic exchange between cinema and television, the arrival of non-stop and live reporting on such networks as CNN and their associated fictionalization of the news. These transgressions have an intrusive impact on our relationship with reality. Images take the place of reality. They rewrite history. This schizophrenic relationship is the central principle in the work of Johan Grimonprez, who makes use of the aesthetic strategies of contemporary mass media to explore the phenomena of identification, voyeurism and fatalism, and at the same time propagate a critical, self-reflective distance.

Grimonprez studied photography and mixed media at the academy in Ghent and thereafter spent several years in New York, at the School of Visual Arts (1992) and the Whitney Museum Independent Study Program (1993). He received a graduate degree from the Jan van Eyck Academy in Maastricht (1995) and has taught at the department of plastic arts at the University of Paris (1995-96) and at the School of Visual Arts in New York (1998-2004). His early video work already revealed a fascination for obscuring the divisions between representation and reality, fiction and documentary, private and public, critical observation and autobiography. Kobarweng or Where is Your Helicopter? (1992), produced by the School of Visual Arts, is based on Grimonprez’s experiences in the village of Pepera, New Guinea, where on his arrival, he was asked: “Where is your helicopter?”. The natives’ early encounters with the outside world always came from the air: the rumbling of prospecting aircraft, squadrons on their way to bombard Japanese camps in the Pacific during WWII, the occasional aeroplane crashes in the jungle and then, in 1959, the appearance of a group of scientists – in helicopters. For the inhabitants, it brought a radical shock that put their world view into question and obliged them to redefine their own existence according to the outside world’s capsular vision. That impact can be seen in all segments of their society: a child who was born at the time was named Kobarweng, literally “the sound of the aeroplane” – which infers an initial, fundamental difference in experience, identification and representation of reality. In the rain forest, hearing is more important than seeing.

Kobarweng traces the historic moment of the first meeting between two different cultures, a collision that reveals the construction of the ‘other’ within a social, cultural and historic context. The anthropological discourse about the objectification of the other gives no credence to divergent local voices – the voice is still claimed by the way the West writes history. In Kobarweng, the archival images and field recordings are juxtaposed with fragments of texts from the stories of the local population, bringing back the memory of a colonial past. The roles of observer and observed are exchanged. It is not the ‘other’, but the anthropology and its representation that are pictured as an exotic object. The myth of objectivity and the pretence of epistemic disassociation on which the Western scientific and anthropological discourse is based, are unmasked.

The observer is observed: your own view as well, the perspective of the narrator, is continually brought into question. By integrating his own recordings and indicating a personal context, Grimonprez is always considering his own position as an observer and a storyteller. In his award-winning and frequently shown dial H-I-S-T-O-R-Y (1997), a personal story is set in a wider framework. Archival images and quotations are combined with his own filming of intimate and autobiographical trajectories and accounts. At an initial level, dial H-I-S-T-O-R-Y relates the ‘unofficial’ history of aeroplane hijackings and associated terrorism, or rather the unauthorized biography of the relationship between media and terrorism in today’s ‘catastrophe culture’. This playfully ironic pseudo-documentary also contains an underlying theme of ‘being at home’, of belonging and saying goodbye. Grimonprez here refers to a scene from The Wizard of Oz, in which the tornado carries Dorothy’s house away over the rainbow. Like the aeroplane hijackings, it is an illustration of a transgression, across turbulent and contested borders, to the land of utopia.

The theme of hijacking as a metaphor: the house is ‘hijacked’ by television. Viewers are ‘kidnapped’ by the media. Inspired by two novels by the American author Don DeLillo — White Noise (1984) and Mao II (1988) — from which a few fragments are interpreted in a voice-over, dial H-I-S-T-O-R-Y demonstrates how the spectacle of terrorism penetrates our living rooms, as a confirmation of our yearning for the ultimate catastrophe. Television, as cultural theorist Paul Virilio has remarked, has generated a new relationship with death and disaster. The spectacle takes the place of critical distance; the space between the camera and the event, screen and viewer is so reduced that death is practically tangible. While viewers eagerly wallow in collective visions of total destruction, they lose sight of any alternative to the spectacle of terrorism. By investigating the evolution of the way hijackings are represented, dial H-I-S-T-O-R-Y thus frames the complicity between television and history. Video and television have closed the gap between observer and history. As is evident in the final fragments, today’s heroes are no longer the romantic, revolutionary terrorists, but the viewers, or maybe the image itself. Catastrophe becomes comedy.

To rephrase the metaphor, Grimonprez 'kidnaps' images from their context in the same way that broadcasting corporations like CNN re-contextualize their images, by modelling reports on soap operas and Hollywood movies, or by inserting commercials between news items. In this sense, dial H-I-S-T-O-R-Y is not a film about television, and it is even less a film against television: it parallels the television image. Grimonprez views his method and aesthetic as the logical offshoot of a lifetime of expansive television viewing, the result of an atitude for the surreal poetry of 'channel-hopping' – ‘zaptitude’ – that puts the user of the one-way medium of television in a position to write his or her own story. The TV viewer ‘kidnaps’ the television image by way of a poetic act, ‘zapping’ from channel to channel. The idea of ‘zaptitude’ was also central in Beware! In Playing the Phantom, You Become One (1994-98), a mobile video library collated by Grimonprez and Herman Asselberghs from films, documentaries, music videos, commercials, soap operas and sitcoms, varied according to location and the context of their presentation. In one of the video library projects that followed, the selection was organized around the metaphor of the flying house, once again the image from The Wizard of Oz – hence the title, Dorothy Doesn’t Live Here Anymore (1997-2001). With these projects, Grimonprez rejects the notion of the viewer as a passive consumer. In his opinion, the homogeneity of what the media have to offer presents a creative context in which images can consciously be read the wrong way. The boring uniformity of mainstream TV can never impose uniformity in its perception.

In our presence, images replace reality. In his essay Welcome to the Desert of the Real, a shortened version of which also accompanies the DVD production of dial H-I-S-T-O-R-Y, Slavoj Zizek draws a comparison between the events of 9/11 (which dial H-I-S-T-O-R-Y provides with a new, meaningful context) and Alfred Hitchcock’s The Birds. He refers specifically to the scene where for the first time, Melanie, played by Tippi Hedren, is unexpectedly attacked by a bird. Cinema imitates reality, which comes to life as cinema. This dissolution of the distinction between reality and fiction, between real and fake, again form the theme running through Looking for Alfred (2004), which won the 2005 'International Media Award' and was conceived as an homage to Hitchcock, but also as an exploration of an imitation culture. A few scenes document the quest to find a perfect Hitchcock double. The lookalikes were assembled to weave a few narrative lines around the famous little cameo entrances that Hitcock made in his films. The actors are also asked to quote an anecdote from the famous series of interviews with the master that François Truffaut recorded in the 1960s – a characteristic story in which Hitchcock describes the term ‘McGuffin’, the fact or object that forms the theme of a story, but which is in fact utterly irrelevant. During the filming of Looking for Alfred, it seemed that Hitchcock had himself become a McGuffin. The search for an ultimate Hitchcock and the process of making the film brought a certain emptiness to the surface. The nothingness proffered by the McGuffin unexpectedly becomes the driving force, and ultimately the main idea of the project. The film itself, shot in the Paleis voor Schone Kunsten in Brussels, unfolds as a labyrinth of reflections, echoes and quotes from the work of the master filmmaker, as well as of that other great modernist, Réné Magritte. In Grimonprez’s view, both used a similar iconography, which often referred to clones, mirror reflections, projections and misplaced identities. As Grimonprez indicates, both tried to create a kind of ‘Photoshop reality’, in a certain sense a premonition of today’s lookalike culture and the osmosis between cinema and reality.

(Source: Johan Grimonprez,... We Must Be Over the Rainbow, Xunta de Galicia/Centro Galego de Arte Contemporanea, 1998, and various interviews)

Argos published the DVD plus the book of dial H-I-S-T-O-R-Y with texts by, among others, Slavoj Zizek, Vrääth Öhner and Hans Ulrich Obrist. 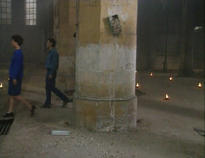 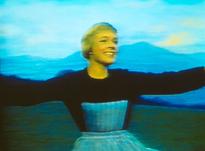