Written by the Italian author Italo Calvino (1923-1985), Invisible Cities is a novel published in 1972. Each of the nine chapters invariably begins with a dialogue between the historical figures Kublai Khan and Marco Polo, then Marco Polo describes cities of the Khan's limitless empire. The result is a collection of fifty-five real or imaginary cities clustered in eleven thematic groups of five each. The aim of Calvino was to symbolise the complexity and the chaos of our reality, but Calvino also lets the reader free to follow his or her own plot because the book can be read linearly or by following any of the eleven categories.
Among these cities, we find Leonia, Trude, Procopia, Cecilia and Pentesilea. The Continuous Cities. For instance, Cecilia is everything and everywhere while Leonia produces so many waste that, if the neighbourhood cities weren't maintaining a similar pressure, its garbage would occupy the entire world. Then there is Trude, the city that includes the whole world, a world in which only the names of the airports change. Or Pentesilea, the city-labyrinth without beginning, extremity, inner or outward spaces.
As in the Calvino's novel, the screening program Continuous Cities goes back and forth between fiction and reality. From Times Square in 1980 to a dreamy room in Brooklyn, the program explores the way filmmakers portrait the perpetual motion of American cities and their inhabitants in order to give an account of their reality. The American metropolis become the metaphor for the perpetual motion of our global village, an example for our daily struggles, social cliché and possible dreams. 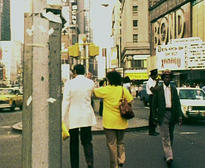 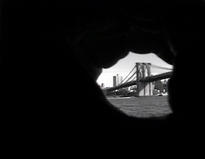 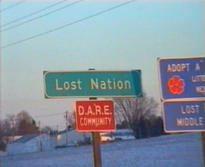