In January 1999, at the height of the Lewinsky-Clinton affair, Herman Asselberghs and Dieter Lesage asked me if’d be in for a trip to Lost Nation. They explained this was part of a project called LOST NATION they were setting up in Brussels: a place slash library slash installation about vanished nations such as Yugoslavia, Czechoslovakia, East and West Germany, USSR, and Zaire. Intriguing, so I thought, and I told them I was in. But where was Lost Nation? Since it was lost, where could we find it? Browsing through their library Herman and Dieter stumbled onto another Lost Nation. This one was located on Highway 136 in Eastern Iowa in the U.S. with a community of 497 citizens. Would I be interested to check it out? Sure! And so, this little road movie was the result. A trip to a nation where the average citizen spends about 5 years of his lifetime waiting in line, 2 years trying to reach people by telephone, 1 year searching for misplaced objects, 8 months opening junkmail and 6 months sitting at traffic lights. A nation that attempted to impeach the wrong president... (Johan Grimonprez)

"WELCOME TO LOST NATION" by Jim Schroeder, Mayor of Lost Nation, Iowa Commissioned and produced by Gojim 5.1 (Herman Asselberghs & Dieter Lesage) as part of the installation ’Lost Nation, a library’ 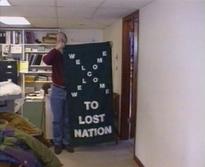 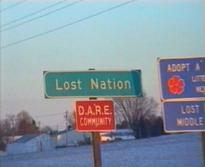 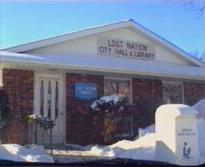 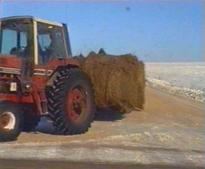