AN EVENING WITH TOM MCCARTHY

The Film Society of the Lincoln Center hosts the British author and artist Tom McCarthy. McCarthy, whose latest novel, 'Satin Island', out in February 2015, will introduce and discuss a double bill of 'Dial H-I-S-T-O-R-Y', Johan Grimonprez’s 1997 essay film on the history of airplane hijackings, and Antony Balch and William S. Burroughs’s seminal 1963 collage film 'Towers Open Fire'. McCarthy: “Both these films fascinate me. I’ve been lucky enough to know and work with the director of one of them; of the other’s I’ve been a fan since as long as I can remember. Key landmarks in the history of a collage aesthetic—mutating at exponentially increasing speed and by definition self-consuming—running from Situationist cinema through MTV and on to YouTube, they navigate a hybrid zone formed from the overlay of essay and fiction, anthropology and poetry and politics. They understand that media is itself a site of struggle, and that all art either incubates or keeps at bay (or both) a type of violence." 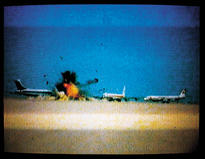