“Buckle up for a bumpy ride down history lane! Welcome to the world’s first unofficial chronicle of international sky-jacking. This pre-9/11 documentary will take you on an alternately frisky and subversive tour of terrorism: From the idealistic heyday of the romantic hijacker revolutionaries of the sixties and seventies to the state-sponsored, anonymous parcel bombs of the nineties. Blending archival footage with personal home movies, this film investigates the media politics within the "imagination of disaster". Inspired by Don DeLillo’s novel Mao II, it is a riff on Delillo’s motif, "Home is a failed idea". Director Johan Grimonprez unwraps our complicity in the urge for ultimate disaster, as the spectacle of international terrorism and the desire for extreme chaos invades our living rooms and threatens domestic bliss. New York composer David Shea provides the original soundtrack to this eccentric rollercaster ride through history.” (Source: Hatje Cantz) 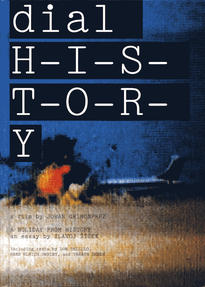