Solos for Others is a piece for two dancers and a pianist interpreting Beethoven’s thirty-three Diabelli Variations. A film by Michael Snow the choreographer happened to watch by chance freely inspires the work. The film consists of a sequence of seemingly unrelated photographs; on the soundtrack a hammer blow accompanies each cut.

Having used the medium video for his first two works, Vincent Dunoyer decided to work with photography for his third. He organized a session in a photo studio, where he sought to reconjure from his dancing memory various poses from different works, and capture them on the photosensitive emulsion. He then selected ninety-nine poses, which together make up the aleatoric score of the spectacle.

The spectacle comprises two parts. In the first, a dancer reproduces onstage, as accurately as possible, the photographs his partner—who is sitting with his back to the public—shows him, all the while responding to Beethoven’s music. After a pause in which the two performers only listen to the music, they swap roles. The dancer now picks up the photographs on the floor and shows them to his partner, but in a different order; it is his partner who now has to interpret them. How to reproduce an image? How to strike a pose, how to abandon it? What narrative is told by this sequence of ‘highlights’ that alternate with improvisations?

After the creation of the performance, a video was produced with the means available, in order to present the score as if it were a flipbook—or rather, one of the possible scores for Solos for Others. 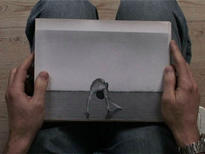 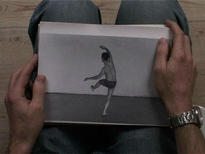 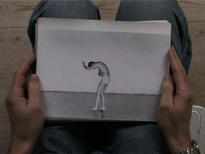 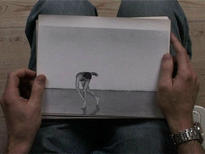