A registration of Vostell’s legendary 1973 happening/ performance ‘Auto-Fieber’, an assignment of Neuer Berliner Kunstverein and Akademie der Künste. For this happening at a Berlin open terrain, cars were placed in close rows. Their trunks were repeatedly – 750 times – opened and closed, while performers were putting white plates in the trunks in order to take it out again. This banal ritual was carried out quickly and without interruption. Fabric tissues with the white plates were placed on the ground before the motorcade. Each participant had to take a handful of salt from a bag and put it on the plates. The motorcade drove back with a very slow pace over this setting. During the entire trip, the participants had been instructed to lick their hands, in which they had previously transported the salt from the bags onto the plates. Afterwards, engines were turned off and each participant was encouraged to saw his/ her traversed plate or its residues onto the fabric. The towels with the sewn plates were then hung in a tree. Vostell adds no comment, and everything takes place in a ritual, almost religious context. The participants remain silent, and do not show any emotion in their faces or gestures. For the soundtrack, Vostell chose roaring engines which only reinforces the subdued, mysterious atmosphere. The same year Vostell also made the sculpture / installation 'Berlin-Fieber' in which a Cadillac is centrally parked between plates. On the sides, motorized utensils sweep the floor clean incessantly. The registration of  ‘Berlin-Fieber’ is also part of Argos collection. 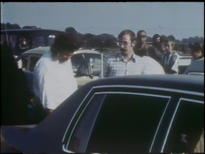 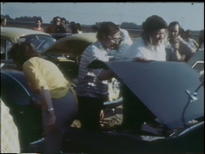 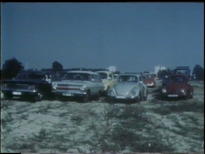