Orla Barry (1969) is an artist who centres her practice on language, written and spoken. Her work is strongly poetic and lyrical, crossing a wide variety of media. Barry was born in Ireland, and the rhythm of her phraseology, the pictorial and narrative vernacular on which she draws, somehow evokes her homeland’s topography, climate and literary heritage. At argos the artist presented two new works.


Foundlings, a video film, was shot near Wexford, in the south east of Ireland where she grew up. This visual poem without a particular narrative and full of autobiographical elements is set at a very slowed down pace. Floating images and heavy voices are central to the associative strategy that is at work here. The images allow one to listen to a hypnotic voice, while at the same time allowing the eyes to wander... to daydream... to travel over drawn out time. The images are country images, images of repetitive calm, the kind of calm one finds between awake and asleep. The speed of the sea sets the pace, regular yet irregular. The images are inhabited by people who cannot speak. Who are busy doing nothing, except passing time. Silent brothers and sisters of the sea.

The soundsculpture Unsaid, a joint work by Orla Barry and Portuguese artist Rui Chafes (1964), is very opposite to the film. The film is full of open spaces and bright colours. The sculpture is black, closed and claustrophobic and on top of that it is housed in a narrow tower five meters tall. The visitor has to take place on a rather unconventional chair and put his head in a closed off sphere, surrounding himself by darkness and leaving him with his own heartbeat. A voice addresses the visitor directly on highly intimate terms. The seating is hard and uncomfortable. One has to be strong to experience this piece that is a perpetual struggle between body and mind.

At the occassion of Barry’s show argos editions published Foundlings, a combined artist book and catalogue that can be ordered through argos. The book includes a DVD. 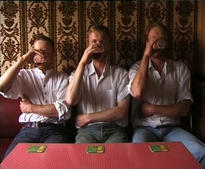 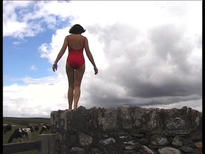 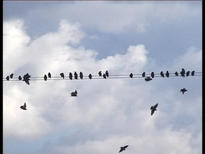