In the context of the exhibition Off by heart and Out of Breath, Argos presents during an evening Wendy Morris’ animation films between 2007 and 2013. Morris’ short films are part documentary, part fiction, part audio-visual poem. They are frequently created by means of a stop-frame animation technique in which charcoal drawings are filmed, altered, and re-filmed.

Wendy Morris is a Belgian based artist working between moving image, diaries, letters and drawings. Her work explores fictional, documentary and autobiographical genres and is concerned with colonial migrations and religious dissent. A South African artist, born in Namibia (1960), the focus of her work is on movements between Europe and South Africa. 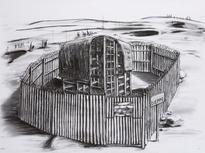