At the centre of this film is a book of engravings mentioned in Agnes’ Tales. Orlando, the brother of Agnes, was awarded the book as a schoolboy in the mid-1860s for being 'The Boy Most Liked by his School fellows’. It is a book of engravings and poems about the English countryside and it shows a rather idealized view of English farm life. The book was awarded to a young man living in very different circumstances on Wesleyan missionary settlements in the rocky, dusty landscapes of the Cape and the Orange Free State – countryside and settlements that looked nothing like the pastoral scenes in the engravings. Since there was hardly any publishing of books that were set in South Africa in the 19thc, most stories and, it follows, most illustrations, were from elsewhere. Not much had really changed by the time that I grew up in South Africa over a hundred years later. All the books we read as children were written, published and illustrated in the United Kingdom. It meant that our earliest literary memories were of other places, for we never saw our place illustrated in books. This is why Orlando's book is interesting to me and it is this, the spaces between those accumulated memories of un-witnessed places and the experienced realities of the places in which we live, that I wanted to explore in a film. 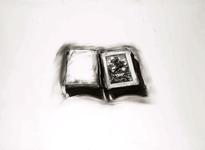