DOWN LOW UP HIGH. PERFORMING THE VERNACULAR

Argos Black Box presents a series of performances and choreographies on video and film that explore notions of movement, space and time within the urban make shift environment of New York City during the early 1970s. The compiled works in Down Low Up High offer a visual and performative exploration of urban space as a physically charged field of investigation. The protagonists of these works – from the dancer to the performer, from the camera to the city, from the passerby to the sparse audience – physically appropriate the public terrain of their daily surroundings through their presence as well as actions. The decision to leave the artist studio and go out on the street stood for an emancipatory and political consciousness that informed artistic production at the time and reflected the city politics that allowed cultural producers to conquer public space. Despite the few who were there to see these actions at the time, these performances, videos and films by film makers and cinematographers such as Babette Mangolte, Bob Parent, Robert Fiori and Bill Rowley are now part of a greater canon that defines the collective memory of New York City at the time. Manhattan was a field of experimentation, a over- as well as non-occupied space that could be reclaimed for the public desire to express everyday actions as well as democratic rights. Down Low Up High presents Trisha Brown´s iconic choreographies from 1970 (Leaning Duets and Man Walking Down the Side of a Building), Joan Jonas´ performative exploration of space, movement, and sound in her video Songdelay, Babette Mangolte´s film Calico Mingling on a choreography by Lucinda Childs, Bob Parent´s film Transformations on a SoHo Street with a performance by Ruth Heller Coron and Elaine Summer´s Two Girls Downtown Iowa, were all four made in 1973, as well as James Nares minimalist and physically experimental video performance Roof from 1975.
Curated by Barbara Clausen. 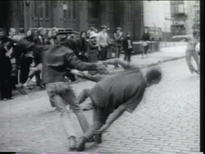 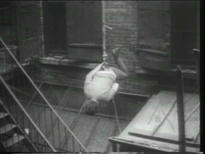 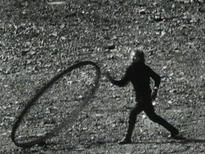 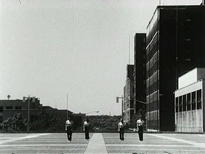 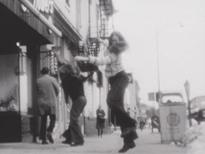 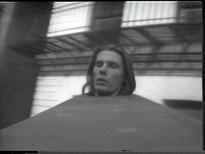