During almost fifteen minutes the camera explores the transhipment buildings, warehouses and silos belonging to the Werf- en Vlasnatie in the port of Antwerp in endless, mainly horizontal travellings from a driving car. The endless docks turn into a poetical labyrinth with railway containers and trucks, loading docks, pallet boards and goods. In these highly organised surroundings each deviant element, like a simple rock, turns into a conspicuous presence. Subtle contrasts between light and shadow, between volumes and voids, open and closed, grant a tension to this desolate place, accentuated by the tiniest movement (the shadow of a man, a driving truck, a sail bellying out because of the wind, a worker who is unshipping). Another contrast is constituted by a short, playful investigation of the surface and the lines of the road surface with the depth of a tunnel effect, obtained with a long, forward travelling in the dark inside the warehouse. Very slowly the exit – a square of light – comes closer. A man passes through the image. A while later the camera traces the perspective constituted by a long row of railway containers. The car stops, and after a couple of movements of the traffic far away the image fades. 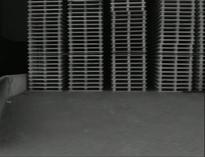 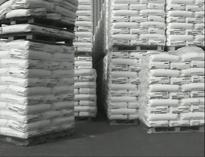 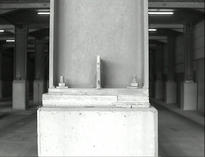