"If I were young, I would destroy a Dan Graham piece, I would smash the goddamn Dan Graham piece." (Dan Graham in an interview with Hans Ulrich Obrist, 2001) This subjective-documentary video is part of a project on the violent and thorough destruction of a pavilion by the American artist Dan Graham. Crabeels has documented the allegorical metamorphoses of Graham’s piece ‘Funhouse for Children’ (1998), which was especially designed for the Sint-Jansplein in Antwerp, but hardly survived its inauguration. The glass pavilion was severely damaged and while restoring it, destroyed beyond repair. The battered remains of this minimal construction were removed and, in time, rebuilt on the green lawns of the Middelheim museum. The context has changed from a busy city square to an idyllic museum. Funhouse has become a different work. It even carries a new title : ‘Belgian Fun’. Has the utopia of art in the public space been shattered, just like the glass pavilion? The title ‘Nearly Present, Just Past’ is a reference to the notion ‘just past’, which characterized the experimental video installations by Dan Graham from the early seventies. During this period Graham made ample use of video recordings, played with a short interval of a couple of seconds, facing the spectator with himself and his surroundings as if it were a decelerated mirror. Here it becomes a metaphor for the adventures of the pavilion and how we perceive them. With this video, Crabeels tries to offer a second chance for the project to acquire its place in our collective memories. 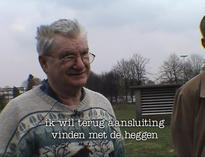 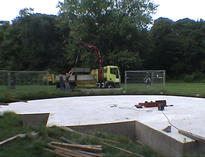 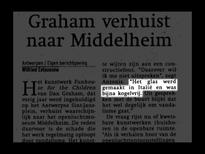