NOW WITH IN THREE PARTS

Now With returns to the motif of the dice. The multiple arrangements of a pair of dice, each equally valid, if not equally valuable, are clearly part of Downsbrough’s attraction to serial systems of arrangement. Like John Cage deferring to and yet manipulating the results he derived from the ‘I Ching’, Downsbrough seems to want both a certain arbitrariness of structure and a tightly controlled composition.
Formally, this work is notable for the introduction of colour. At the beginning, a voice-over spells out the words of the title, introducing a new prominence for the spoken word alongside the visual, although a number of words also appear in the film itself. (…). The word ‘City’ appears prominently, but here it is a sign without specificity, quite different from the throbbing, visceral presence of New York City in the earlier videos. Instead of traffic rumbling and honking through the streets, we hear the metronomic click of the tumbling dice. This world is more abstracted, more hermetic, even. As the voice over says, “These actions always seem to have a tendency to come full circle, right back to zero.” 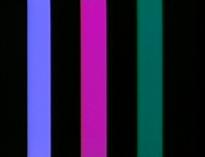 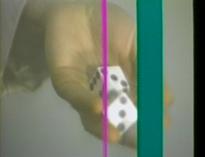 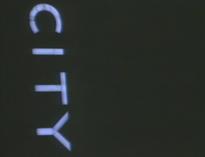 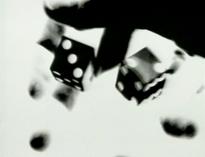