"’My life has become the script of a film that has become my life’. The first episode of a film tetralogy called Babel - the other episodes are still in the making - ’Letter to my friends who stayed in Belgium’ narrates the day-to-day existence of a film-maker who is making a film about Babel and who has a notion to follow in the footsteps of dramatist Antonin Artaud and visit the Tarahumara people of Mexico. Of no fixed abode, he wanders around the city where he feels at home - Brussels - but eventually sets off for Mexico. On his return, nothing is in quite the same place and people have changed. The problems left behind resurface. He loses his employment, has to find new lodgings, quarrels with his friends and - from being the most sociable of persons - ends up on his own, mournfully singing "Parlez-moi d’amour"! Likewise, the city is disintegrating and the whole kingdom seems threatened. This film is a diary and self-portrait of film-maker Boris Lehman who films himself and plays his own role (as do several hundred friends and acquaintances who all agreed to be babelized), but at the same time it is a fictional account of the thousand and one adventures of a hero who finds it hard to cope with life and love. This is a film about intimacy and friendship, written in the first person; after the manner of Dziga Vertov - The Man with the Movie Camera (1929) - it places Boris and Brussels, Babel and Bruegel, in the centre of the universe, here represented by the crazy, vertiginous, endless spiral of the biblical Tower." (Source: https://www.borislehman.be) 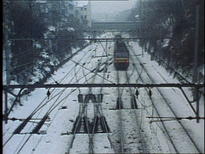 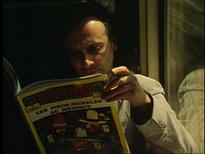 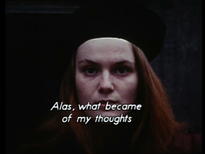 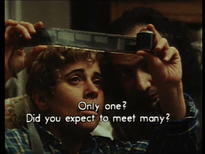