As indicated in the subtitle Tiehrmehlfabrikant Dr. Fred Eicke weiss Auswege, this work centres on the animal food producer Fred Eicke (a part played by Peter Berling). The title refers to The Corrosion of Character (translated into German as Der Flexible Mensch), a book from 1998 by the American sociologist Richard Sennett. In it, Sennett describes the effect of the ‘new’ flexible capitalism on society’s shifting system of norms and values.

Seated in front of a background reminiscent of a scene from a science-fiction movie – a blue key onto which nightly traffic rushes by at breakneck speed – Eicke is interviewed about his profession.

The man, however, somewhat resembles a mafia boss: big massive chain, black hat, and leather jacket. He is also wearing an oxygen mask. He recounts his activities and experiences as an entrepreneur in the – equally – globalised market of cattle fodder and the animal trade.

Eicke is in bad shape – aside from respiratory problems, he also suffers from cardiac ailments. Throughout his story, parallels between his physical condition and the functioning of the market in fortress Europe, specifically the position of the consumer therein, become increasingly more apparent. 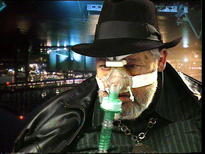 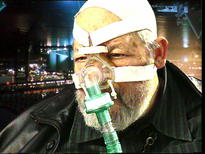