Old Super8 images of the Belgian National Holiday celebrations in Brussels were edited by Axel Claes into a short snapshot. The short, volatile fragments give an impression of an occupied city, just when the parade, headed by king Baudouin/ Boudewijn, runs over the inner city, raising looks of awe and amazement with its military display. The images were completed with a sound recording of the Zinneke Parade, a biennial parade which aims to show the cultural diversity of the city, once described by columnist and poet Geert van Istendael as “a great homage to the most important thing in Brussels: bastards”. Axel Claes fools around with the idea of contrasts and especially the formal similarities between the two mass gatherings. 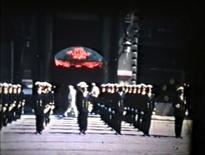 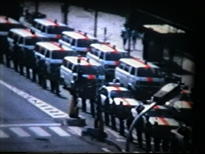 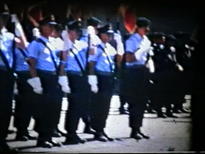