ART IN PARIS IN THE MID-EIGHTIES

In the mid-eighties, after a hiatus of more than 10 years, Cornelis was once again engaged in the fine arts, aware that the artists whom he had interviewed in the 1960s and 1970s were now active on a wider, international stage. Here, he reports about two major events that took place in Paris in 1985 and 1986.

Daniel Buren (Palais Royal)
1986, 18'16”, colour, Dutch and French spoken, English subtitles.
An interview with French conceptual artist Daniel Buren (1938) and views of his work in the main courtyard of the Palais Royal, Paris. Daniel Buren is very specific about how he relates to site specific work. First, he does an analysis of the general constraints of the site and then he formulates a response to it. As he puts it: "A clear eye will recognize what is meant by freedom in art, but an eye that is little less educated will see better what it is all about when it has adopted the following idea: that the location (outside or inside) where a work is seen is its frame (its boundary)".

Biënnale van Parijs 1985
1985, 67'40”, colour, Dutch, English, French, German, Italian and Spanish, English subtitles.
Held at the Grande Halle de la Villette, the Biennale de Paris of 1985—the 13th edition since its creation in 1959—is among the most important exhibitions of the 1980s. Organized by an international team of curators and art critics including Georges Boudaille and Gérald Gassiot-Talabot (French), Kasper König (German), Alanna Heiss (American), and Achille Bonito Oliva (Italian), the Biennale was a platform for both established and up-and-coming artists active in the mid-1980s. Those featured here include Georg Baselitz, Daniel Buren, Richard Deacon, Keith Haring, David Hockney, Anish Kapoor, Anselm Kiefer, Bertrand Lavier, and Lawrence Weiner—most of them filmed installing their work. Mainly realized during the mounting of the exhibition and its opening, the film documents the conversations held during the preparatory phases of the event about the revival of figurative art, the role of museums and television, the individual nature of artistic experience, and reveals the stakes and debates involved in this artistic community. 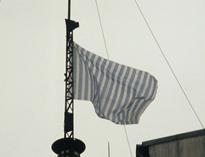 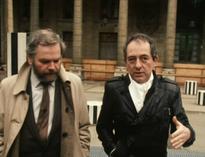 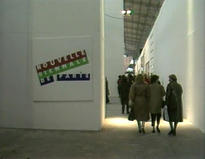 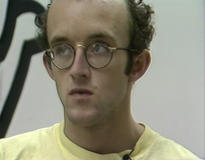