For modern and post-modern artists alike, the street has served as muse, stimulus, and stage for aesthetic production. It is a heterotopic site, where all actions are seemingly permitted, and simultaneously dystopic, where social injustices are exposed and raw. Canadian artist Jayce Salloum continues this tradition of exploring the terrain of the metropolis.

"The ongoing body of work carries on my attempt to engage critically in the representation of cultural manifestations, looking at private and public space, the tableaux of ’domestic’ settings, commercial enterprises acting as ideological stage fronts, and the spaces of intimacy in-between both these semi-public areas formulated from very private initiatives in the realms of one’s subjective and practical life. The points of contact are found in details of the street, the transactions and apparatus of commerce and its daily interface, the store windows, the street vendors, the ad campaigns, and the minutiae of visual artefacts filling the machined frame. The placements of objects over time, hand-written signage and other personal contributions of the planned and accidental provide evidence of meaning and gestured improvisations. New York is viewed as a ’sign’ of the ’city’ and as a referent to this post-industrial period. In a more specific way the city is seen as a locator and map of identification where specific acts and struggles of representation are played out. Coincidence and intention are aligned in this pedestrian field of vision that is fed off of as we pass by, the ’real’ is surmounting the ’simulacra’." (Jayce Salloum)

With the exhibition Home Made Chocolate Salloum presented more than a hundred photographs of storefronts. These photographs were an implicit examination of display practices -stacking, arranging or marking- in the context of ordinary culture. Whether such displays were organised haphazardly or carefully, each manifested particular logic, hierarchies, and sentiments of representation. In turn, the photographs themselves were clustered and hung on the exhibition wall in unusual configurations, in a kind of salon-style arrangement. Salloum’s installation at argos disconnected the storefront from the continuous expanse of the street. Whether singularly, in pairs, trios, quartets, or in oblong or transverse relationships, they countered the aura and authority of the singular image. They acted as reliquaries of street affect: records of specific atmospheres, experiences, and moments were configured together, oriented in relation to beholders as if pedestrian themselves. There was an intriguing reversal to the dimension of display: on the one hand, the street acted as a gallery for the photographer, on the other, the gallery became a virtual street for the beholder. The circuits of meaning at play here were manifold, each viewer would walk away with his or her own network of interpretations. Salloum’s installation continued in the photographic tradition of imaging the street -but avoided the urge to make the city comprehensible, legible, stabilised.

These colour photographs were shot predominately in New York between 1988 and 1997, but also included images shot elsewhere while Salloum was travelling and working (i.e. Los Angeles, Paris, Holland, Montréal and Vancouver). 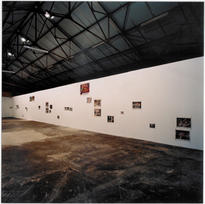