The work of Ria Pacquée (1954) explores the possible differences, intervals and overlaps between fiction and reality. Her field of study is the street and urban space in the broadest sense. As an observer of public life (which results mainly in photography and video work) and as a participant (performances), she tries to find an answer to the most elementary questions concerning our existence. She is interested in rituals, the delusion and lunacy of religion, anonymity and an almost obsessive wandering, and these are also important bases for the collection of the images and sounds that will ultimately shape her work. At Argos, Pacquée is showing Westerly Winds, a new arrangement of ten early, recent and new works. Although they go back to 1980, this mosaic of seemingly minor events consists mainly of work from the last five years. In that period, Pacquée zapped eagerly between East and West like a modern nomad. She travelled around in Morocco, India, Tunisia, Yemen and elsewhere, and Belgium and France too. She groups together and edits this worldly material, recorded in the form of photos, slides, notes and videos, shaping them into series based among other things on similarities of form. Although her videos do not have any narrative core or coherent structure, these collected recordings of ephemeral, seemingly banal everyday events are elevated to the level of informal visual-anthropological observations of human behaviour. Works, such as the series of slides called Resting (2011) and the video Dive into Mankind (2009) do not conceal their content. The images of people resting and bathing originate from different cultural contexts and refer to widely differing situations, while gaining an import that is both prismatic, contemplative and playful. Throughout the exhibition we hear a subtle echo of the artist as an individual, for whom life means experiencing a succession of shared moments. Pacquée guides the viewer on a synergetic circuit and illustrates the fact that ultimately our perception of reality as an all-encompassing image is to some extent always illusory. 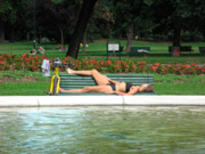 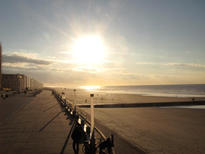 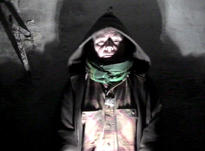 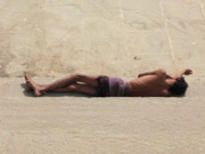