’Vox Clamans in Deserto’ is a combination of filmed reality (blood running down streets after a ritual slaughter in Moroccan Medina) and performance (a woman flinging sand into her face), intersected with a plain bright red screen. Pacquée includes images of other red sights – people wearing red clothes, red numbers or wall paintings, red handprints – and develops the performance almost as a narrative. A black-clothed figure approaches the camera across the sand, gains a red stick, buries a red carpet, and adds a layer of red clothing. This figure – face sometimes obscured and once revealed – tries to drown the red in sand, as though extinguishing a fire. Through the combination of performance and reality, the images obtain a symbolical connotation, representing death and war. 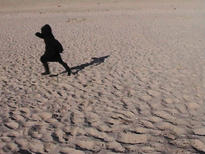 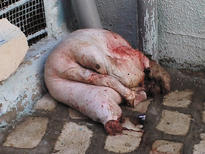 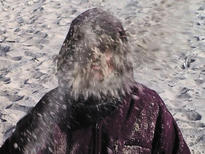