After a first presentation at Gallery Sofie Van de Velde (Antwerp) in the autumn of 2016, The Odd Hour Cinema by Anouk De Clercq is now on view at Argos. This programme features a selection of her most fascinating single-channel works that are screened in Argos Black Box (variable schedule). Like in her multidisciplinary work, The Odd Hour Cinema explores the audiovisual potential of computer generated and manipulated images to create possible worlds, many of which have a strongly architectonic character.

Check out the schedule here!

Thing (2013)
An architect talks about the city he has built. Gradually we realise that the city is imaginary. His account is an attempt to give his ideas a fixed shape.
Swan Song (2013)
The metaphorical phrase Swan Song refers to an ancient belief that the swan is completely silent during its lifetime until the moment just before death, when it sings one beautiful song. What song does a pixel sing before it fades?
Oh (2010)
Inspired by the architect Etienne-Louis Boullée (1728-1799), this richly textured video investigates the allegorical tension between inside and outside, real and imaginary, two- and three-dimensional, analogue and digital, immensity and intimacy.
Oops wrong planet (2009)
A grope in the dark beyond time and space, an attempt is made to establish contact with a different planet, but clear contact appears impossible.
Me+ (2004)
A small white cross moves against an otherwise black, empty screen, then multiplies itself to become two crosses that dance around the screen together, only to then disappear together.
Conductor (2004)
A lightning conductor appears as a musical conductor for the cloud cover. At the core of an increasingly threatening blaze of fire and a whistling wind, a minuscule light has final call, until the violence of heaven discharges abruptly and the lightning conductor throws it all off-screen.
Building (2003)
Building is inspired by the concert hall in Bruges and thereby also pays homage to the work of the Belgian architects Robbrecht and Daem. The building reveals itself as in an architect's dream, as a spatial and atmospheric starting point for users to start leaving their marks on it. 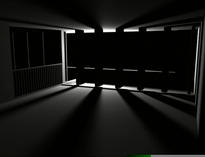