A small white cross moves against an otherwise black, empty screen, then multiplies itself to become two crosses that dance around the screen together, only to then disappear altogether.
The text was written and whispered by Anouk De Clercq herself. The music that one hears in the background was composed by Anton Aeki.
As the viewer, you become conscious of the influence of the text and electronic music on the two-dimensional image. As a result, the graphic, flat black field with the transitory, minimal crosses suggests more than that: an intimate love story in a three-dimensional space that seems to be an infinite universe. 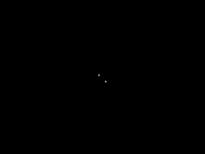