Ant Farm was founded as an architecture and design group in 1968 by Doug Michels and Chip Lord, who were soon joined by Curtis Schreier, Hudson Marquez, and W. Douglas Hurr. Other members came and went over the years. The collective, whose base shifted between San Francisco and Houston, saw themselves as part of the cultural underground. A friend compared them to a toy Ant Farm, where frenetic activity takes place below the surface and collectivity is a way of life. The name stuck.

In the early years of their collaboration, Ant Farm set out to create a new architecture suited to an alternative, nomadic lifestyle. They concentrated on developing giant inpatable structures, easy and cheap to build and transport and symbolic of their opposition to mainstream Brutalist architecture. Ant Farm completed several successful architectural commissions, including their award-winning House of the Century in Texas. But their wide-ranging and imaginative interests could not be satisfied within a single discipline, and from the beginning Ant Farm explored the expressive potential of video and performance. Media Burn, a spectacular performance and later a widely distributed videotape, was a literal collision of two American icons: the car and the television set. On July 4, 1975, in the parking lot of San Francisco’s Cow Palace, Schreier and Michels drove the Phantom Dream Car, a customized 1959 Cadillac Biarritz, full speed through a pyramid of flaming TVs. Ant Farm also worked with T.R. Uthco, San Francisco artists Doug Hall, Diane Andrews Hall, and Jody Procter, to create The Eternal Frame. This 1975 videotaped reenactment of the Kennedy assassination is a quintessential comment of the replacement of real experience and memory with a mass-media version etched into the collective consciousness. Ant Farm’s 1974 public sculpture Cadillac Ranch is that rare artwork that has achieved the status of icon. Commissioned by Stanley Marsh 3, Ant Farm members Lord, Michels, and Marquez partially buried ten Cadillacs nose down in a wheat field on Marsh’s ranch in Amarillo, Texas. The work is both a celebration of the evolution of the tailfin (1949­1963) and a critique of Detroit’s practice of planned obsolescence.

Ant Farm disbanded officially in 1978 after a fire in their San Francisco studio destroyed much of their work. (Source: https://www.architecture.yale.edu) 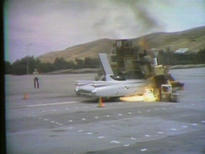 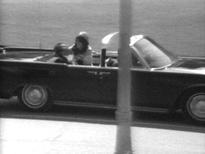