Bernard Heidsieck, a multimedia poet, finds his origins in action poetry and is one of the cofounders of sound poetry together with Henri Chopin, when, in 1959, they started to use recorders and microphones not simply as reproductive tools but as transformative mixing devices.

Heidsieck published his first book of poems in 1955 and shortly afterwards he started his first recording experiences. He participated in the different avant-garde festivals of the 60’s in Paris, particularly the rare Fluxus evenings, before starting to organize his own events at home or elsewhere: evenings of lecture, performances, and sound poetry in the 70’s at the Soleil Noir in Paris. In the 1980s he co-founded the international festival Polyphonix with Jean Jacques Lebel. He also published some vinyls, the first book-record (5 vinyls included) in the 70’s at Soleil Noir in Paris; he published some pieces in OU review from 1954 to 1974, some records like L’encoconnage and Poèmes-partitions etc., and lately the box (CD+texts) Vaduz, at Conz editions in Verona. A few CD’s and ‘plaquettes’ will be published in 1999. Jean Pierre Bobillot published Bernard Heidsieck’s first book on his own work in 1997, at Jean Michel Place editions.

Bernard Heidsieck has never abandoned the meaning or the sentence, he invents a new visual ‘dramaturgy’, gestual, verbal and sound, with pre-recordings and simultaneous improvisation on the microphone, live, creating what he has named action poetry (in action with a predefined partition). Creator and interpreter of his own production, he produces his work in which the text-body and the voice are an indissociable whole. 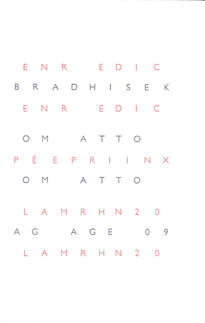