Revue OU – Cinquième Saison is undoubtedly the most interesting group of sound works in the Argos collection. This magazine, founded by Raymond Syte in 1958, was originally called Cinquième Saison – Revue de poésie évolutive; a rather unconventional periodical that concentrated on ‘new’ poetry or – in its own words – La Poésie Jazzante.

After two editions, the French thinker, writer, poet, composer and musician Henri Chopin (1922-2008) took over from Syte. He saw to it that from number 20 (which appeared in spring 1964) to number 44 (1974) this magazine excelled: in addition to writings printed in the unconventional magazine format of 27 cm square, the publication was accompanied by limited edition 7 and 10 inch vinyl records. The Revue OU also contained graphic scores and artist’s contributions – often collage art or works of a very varied nature on paper. In this way Revue OU (Chopin only retained the subtitle Cinquième saison out of respect for his predecessor) developed into a haven for the avant-garde of sound and literature of the time, though it did not forget their predecessors (the sound work goes back to 1918).

Up to 2002 collectors were offering astronomical sums for the original magazines and Revue OU was in danger of fading into oblivion. But in that year Emanuele Carcano published a new selection that covered the years 1964-1974 through his Alga Marghen label, thereby adding extra archive material that provides even more contextual background for the project.

The exhibition entitled Revue OU – Cinquième Saison: An Anthology of Sound Poetry brings together the complete digitised sound contributions made by François Dufrêne, Brion Gysin, Raoul Haussmann, Bernard Heidsieck, Arthur Rimbaud, William S. Burroughs and Paul De Vree. The visitor is invited to browse at will through these dozens of phonetic poems, pioneering pieces of musique concrète, bruitage collages and much more, all on four sets of headphones.

The graphic contributions exhibited, by dozens of unconventional artists, writers and thinkers, including John Cage, Marcelle Cahn and Ben Vautier, not only emphasise the historical importance of the works – they truly break with tradition – but also enliven the fairly limited exhibition circuit: these inspired artists were not afraid to inject humour into their work.

Henri Chopin’s own work, iconoclastic and manifest, was of course well represented in Revue OU. Chopin used his own voice, which he was able to manipulate on early tape recorders by editing the tape itself. He was firmly convinced that sound is just as indebted to the oral tradition as to literature, and in his fragile compositions he sought a balance between chaos and order, always putting the accent on the sound itself.

This now departed artistic jack-of-all-trades – Chopin was also a painter, printmaker, designer, typographer, independent publisher, film-maker, radio-maker and promotor of the arts in general – was able to make Revue OU into a catalogue of sounds that documented the main trends in avant-garde sound art after 1918. (Ive Stevenheydens) 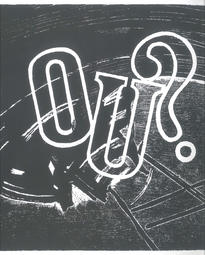 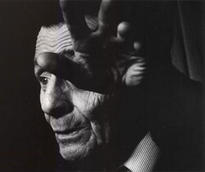