This animation begins with a yellow-and-blue star, that looks like the Star of David. In the center of the star there’s a drawing of a man with his hands and feet tied up. The star is turning around, and black and white circles appear. A distorted voice is talking about absurdity, structure and limits. Two men are now in the center of the star, still with their hands and feet bound together. Fascination for the human body is a recurring theme in the work of Van Kerckhoven.

"An installation that gives every 15 minutes an image of the relative power-unfolding during the struggle between now, its past and the future. It is a video-clock that ticks on the rhythm of eternity, examining the powers of cycles and numbers through contact of exact time-measurement with the hidden values that procure evolution and devolution. It is a cyclic rotation, founded on the 4 fundamental symbols which are the circle, the cross, the square and the center." (AMVK) 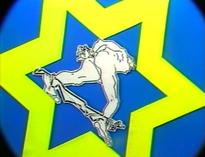 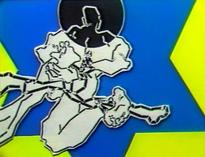 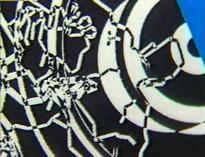 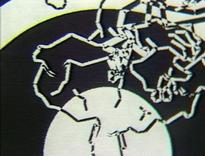 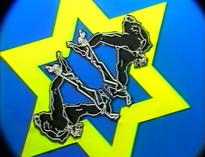