The work of Ria Pacquée contains narrative aspects, firmly rooted in a social awareness, which do not seem to take shape until the final stage of the editing. ’Between Two Walls’ is a montage of clips showing the worship of people of different faiths in Jerusalem – in the streets, in the temples, at shrines. A group of men kneeling silently, a woman rocking back and forth, a girl blocking out the world with her prayer book, a scribbled prayer on a piece of paper. The Wailing Wall itself is not fully depicted, but linking the various clips is the sound of the songful and sorrowful prayers, and images of walls and barriers present in the background. In this land and city so fraught with conflict and division, Pacquée juxtaposes the spiritual with the everyday realities in this city – armed guards, traffic, exclusionary signposts, wall posters praising Palestinian martyrs. 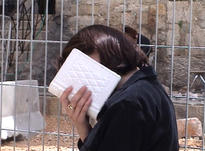 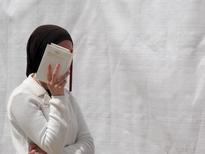