"Yet not to forget that extraordinary place where so much of the new and exciting performances at that most interesting time in New York, took place. There was a Theater there; and a place for the first Happenings. An Art Gallery... and later the famous Judson Dance Theater. There was Philip Corner first performance. The concert was in early 1962, January 2nd, to be exact. Handwritten change on typescript: Yoko Ono’s studio, changed at the last moment to Judson Church. A lot of players; and a lot of pieces. Some of my old friends, like Toshi Ichiyanagi or Richard Maxfield. And a lot of new names from California, Dick Higgins and Alison Knowles, the connection between the old New York and this new scene. The creation of the Dance Theater: Philip Corner involvement with it from the beginning. Excerpts from the liner notes of Volume One, written by Philip Corner: ’Passionate Expanse of the Law’ (1959), extract from the first NY performance, featuring Charlotte Moorman, Philip Corner, Malcolm Goldstein. ’I wrote this on an Army cot in Texas, in the Fall of 1959; a continuation of and a major development my exploration of maximum disjunction.’ ’Air Effect’ (1961), first performance, featuring Philip Corner, Alison Knowles, Malcolm Goldstein. ’From 1961 already my music became characterized more and more by attention to the continuous quality of sound. A chamber ensemble, dedicated to directness of breathing.’ ’OM emerging’ (1971). ’As pure to begin’ (1963), Philip Corner, piano with preparations, objects and amplification. ’The purity of keyboard sounds turn progressively noisy, effected by the strings themselves being touched, and touched by objects which are then laid on them and magnified by microphones’. ’Music, reserved until now’ (1963), recorded at Judson, 1965 and featuring A-yo, David Behrman, Philip Corner, Malcolm Goldstein, Dick Higgins, Joe Jones, Alison Knowles, Jackson Mac Low, Charlotte Moorman, Nam June Paik, Chieko Shiomi. ’A score for non-traditional sound sources.’ ’Composition with or without Beverly’ (1962), recorded at ONCE Festival in 1963; Philip Corner, piano with prepared tape sounds. Digipack first press of 1000 copies, including a 12 pages booklet with liner notes, scores and original documentation."
(https://www.forcedexposure.com/) 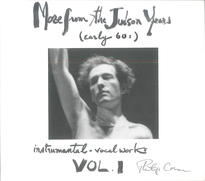