De Boer invited the Brussels-based pianist Jean-Luc Fafchamps to play John Cage’s eponymous composition ‘4’33”’ twice in front of a live audience in the Brussels’ studio space of P.A.R.T.S. (The Performing Arts Research and Training Studios). Once, with one single still take, the camera films his execution of the ‘silent’ musical composition, complete with the three punctuations indicated on Cage’s simple line score at 1’40”, 2’23” and 30”, which the otherwise still and absorbed Fafchamps interprets by striking a timer. Filmed on 35 mm film, which ensures palpable visual detail, this first part is married to its synchronously recorded ambient sound, which is played in Dolby surround when the work is projected. For the second performance, and the second part of her film, De Boer cut all sound, interjecting only with the timer’s click at 1’40” and 2’23” and 30” into the 4’33” filmed performance. The camera travels in a long pan that begins where the first section does, at Fafchamps, but then moves steadily along every member of his audience and finally travels outside the studio door to show a parochial landscape at the edge of the city centre cut through by telephone wires and animated by wind-blown bushes. None of this is heard. Viewed in a cinema setting, the second performance, and the second part of the projected film rely on the ambient silence of the live audience. 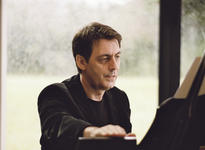 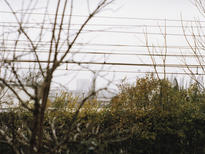